We can make it better than it was. Better...stronger...faster.

It is not a novel observation that computers have become so powerful that a reasonably recent system has a relatively long life before obsolescence. This is in stark contrast to the period between the nineties and the teens where it was not uncommon for users with even moderate needs from their computers to upgrade every few years.

This upgrade cycle was mainly driven by huge advances in processing power, memory capacity and ballooning data storage capability. Of course the software engineers used up more and more of the available resources and with each new release ensured users needed to update to have a reasonable experience.

And then sometime in the early teens this cycle slowed almost as quickly as it had begun as systems had become "good enough". I experienced this at a time I was relocating for a new job and had moved most of my computer use to my laptop which was just as powerful as my desktop but was far more flexible.

As a software engineer I used to have a pretty good computer for myself but I was never prepared to spend the money on "top of the range" equipment because it would always be obsolete and generally I had access to much more powerful servers if I needed more resources for a specific task.


To illustrate, the system specification of my desktop PC at the opening of the millennium was:
But by 2013 the specification had become:

The performance change between these systems was more than tenfold in fourteen years with an upgrade roughly once every couple of years.

I recently started using that system again in my home office mainly for Computer Aided Design (CAD), Computer Aided Manufacture (CAM) and Electronic Design Automation (EDA). The one addition was to add a widescreen monitor as there was not enough physical space for my usual dual display setup.

To my surprise I increasingly returned to this setup for programming tasks. Firstly because being at my desk acts as an indicator to family members I am concentrating where the laptop was no longer had that effect. Secondly I really like the ultra wide display for coding it has become my preferred display and I had been saving for a UWQHD

Alas last month the system started freezing, sometimes it would be stable for several days and then without warning the mouse pointer would stop, my music would cease and a power cycle was required. I tried several things to rectify the situation: replacing the thermal compound, the CPU cooler and trying different memory, all to no avail.

As fixing the system cheaply appeared unlikely I began looking for a replacement and was immediately troubled by the size of the task. Somewhere in the last six years while I was not paying attention the world had moved on, after a great deal of research I managed to come to an answer.

AMD have recently staged something of a comeback with their Ryzen processors after almost a decade of very poor offerings when compared to Intel. The value for money when considering the processor and motherboard combination is currently very much weighted towards AMD.

My timing also seems fortuitous as the new Ryzen 2 processors have just been announced which has resulted in the current generation being available at a substantial discount. I was also encouraged to see that the new processors use the same AM4 socket and are supported by the current motherboards allowing for future upgrades if required.

I Purchased a complete new system for under five hundred pounds, comprising: 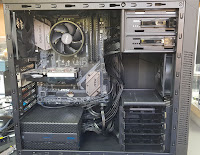 to which I added some recycled parts:
I installed a fresh copy of Debian and all my CAD/CAM applications and have been using the system for a couple of weeks with no obvious issues.

An example of the performance difference is compiling NetSurf from a clean with empty ccache used to take 36 seconds and now takes 16 which is a nice improvement, however a clean build with the results cached has gone from 6 seconds to 3 which is far less noticeable and during development a normal edit, build, debug cycle affecting only of a small number of files has gone from 400 milliseconds to 200 which simply feels instant in both cases.

My conclusion is that the new system is completely stable but that I have gained very little in common usage. Objectively the system is over twice as fast as its predecessor but aside from compiling large programs or rendering huge CAD drawings this performance is not utilised. Given this I anticipate this system will remain unchanged until it starts failing and I can only hope that will be at least another six years away.
Posted by Vincent Sanders at 18:15