Yesterday was not a great day. One of the family's cats died. 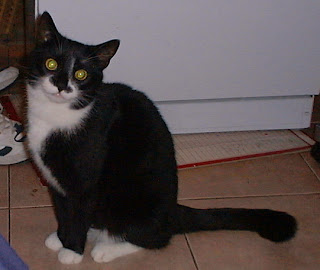 Molly, for that was her name, came to us the week Melodie and I moved into our first house together. September 15th 2000, in the middle of the fuel protests which were raging at the time, we hired a van and moved in.
Most people would have considered that enough for one week! We happened to be in Halifax on the Sunday afternoon at the supermarket and decided to visit the RSPCA because somehow we decided what our new home needed was a cat.
On that day a decade ago we saw Molly and Lucy, a pair of cats who needed a new home as their previous owners had a baby who was allergic to them. I still recall them skulking at the back of their cage in the cattery, Lucy who was reluctant to come down of a perch to be petted and Molly looking generally unhappy. No-one else wanted this misfit pair because they were already both over 5 years old, the warden despairing of ever finding them a home.
Of course they were obviously the right animals for us! ;-) So by the end of the week we had taken them home. Molly immediately showed how things were going to be by shredding her way out of the RSPCA provided double walled cardboard carrier. To the day she died she detested being placed inside a carrier, funny that. 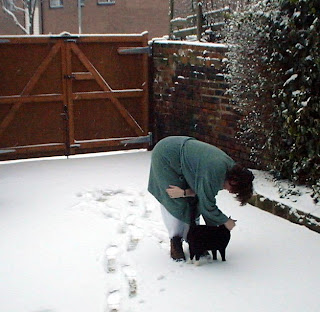 By the end of the year, when the snow came, the cats ruled the house and we were all happy together.
Little did we realise that soon in the summer of 2001 there would be another arrival to the family. 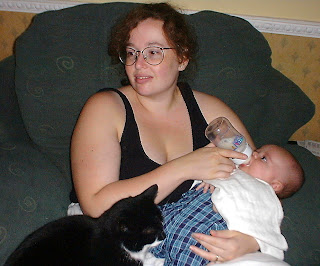 The arrival of our first child in June 2001 was a complete change in all our lives but we all managed to settle back into a routine. Although the banishment of the cats from upstairs remained a point of disagreement for a long time.
As Alex grew up the cats learned that feeding times for Alex could result in all manner of things falling from above. Soon Alex was mobile which resulted in different lessons on cats being sharp objects if not treated with respect. In February 2003 our family grew once more with the arrival of Joshua. The cats, now used to infants, took this in their stride. 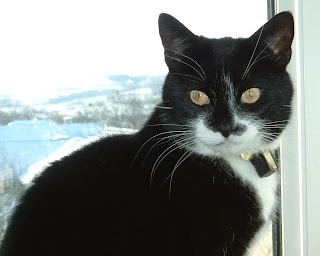 While still about day to day the cats are not captured on camera so often form this point on.
Over the forthcoming months they ensured they were out of reach of the newborn and the precocious toddler.
By the time of Joshuas first birthday in 2004 Molly had taken to hiding "out of the way" as much as possible but remained as affectionate as ever. 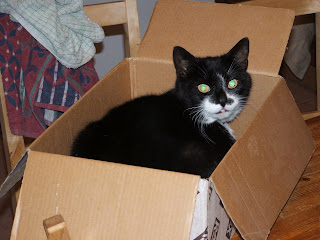 As the children grew up and life progressed Molly became ever more at home and developed the odd aggravating trait like taking clean washing off airers and dragging it out the window, through the cat flap and upstairs so she could sleep on it!
She still enjoyed participating in claiming boxes and defending them vigorously though!
The kids took on the job of feeding the cats which made their bond closer ensuring they were greeted by happy cats sitting lookout as they came home from school each day.
Molly continued to be a good companion and an infuriating self centred animal like all good cats. 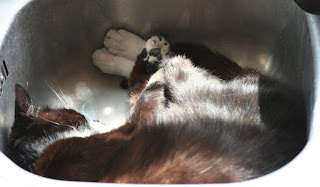 Then on Tuesday evening our Neighbour knocked on our front door. They gave us the news that one of our cats had been run over and taken to the Vet. I immediately went to the back door and called and shook the treat box.
Lucy came running, but molly did not. We rang the vets who confirmed they had molly (we had them electronically tagged back in Halifax) and that they advised we did not come and see her until they had chance to asses her and deal with the shock.
As the days progressed her prognosis improved and then sank. She had a broken jaw, broken teeth, a dislocated hip, extensive bruising and something was definitely wrong with her kidney function.
Thursday evening the whole family went to see her and she purred and seemed happy to see us, she looked as bad as I feared though and somehow I knew there and then that this was probably goodbye. The children stroked her and petted her for a while and we left with an odd sadness, oh and to the sound of molly trying to gouge the veterinary nurse.
Yesterday she was due to have surgery to fix her jaw and hip...Alas when she was anaesthetised and x-rayed once more it became evident the hip was not just dislocated but her femur was fractured and there was additional damage. So just after midday came the call to ask what we wanted to do. The vet could attempt the repairs but due to her age and the other complications it was probably futile. So with heavy heart we agreed the best thing was not to revive her and she died a short time later.
I shall miss her morning greetings, her demands for attention, her sleeping in odd places and her companionship. I keep calling for her at meal times forgetting she will never come. I think Lucy is upset too, after spending their lives together her friend is gone and I cannot explain that to her.
So that is the end of Molly, a good cat.
Posted by Vincent Sanders at 03:00 2 comments:

When I am writing software sometimes XKCD is accurate!
Alas I can only fully participate in that activity when the boys get home from school.
The rest of the time I have to make do with other distractions.
I am currently participating in a "higher" speed broadband trial (I already have a 50Mbit service). This appears to involve the drastic step of remotely reconfiguring my Cable Modem :-)
In the last week there has been the odd request from the trial organisers to test throughput using various website based testing applications. These applications seem completely unable to cope with these 50Mbit+ connections and the results are as unreliable as expected.
To address this the trial organisers asked us to time downloading of a gigabyte file from one of their servers. I was surprised to discover that it took over 350 seconds to download the example file giving a less than stellar 3Megabyte/second rate.
So I used some "compiling" time today to look at what was going on. Firstly I went looking for an iperf like tool for http. Turns out there isn't one which came as a bit of a surprise...oh well with a little help from my friends I came up with

Which gets a file with a "Current transfer speed" for each second of the transfer. Well ok so lets do the transfer a few times and collect the output so we have a reasonable data set.
So we have a pile of numbers...not terribly useful, lets visualise them! to the gnuplot mobile!
We need a gnuplot script something like say this:

Once run through gnuplot I extracted a lovely graph which shows a couple of things. 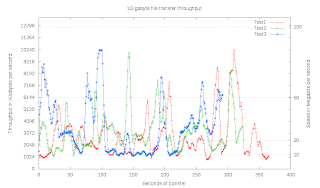 Mainly that even with a nice fat downstream you are unlikely to realise the maximum throughput very often even from a server on your ISP local network.
On the other hand I now have a way to examine throughput of downloads ;-)
Posted by Vincent Sanders at 18:57 1 comment: