Men admire the man who can organize their wishes and thoughts in stone and wood and steel and brass.


I would probably not yet worthy of the admiration Emerson was alluding to but I do like to make things. As anyone who has read previous posts knows I have pretty much embraced the "do things, tell people" idea.

One small wrinkle is doing things needs somewhere to work. Since moving myself and the family to rented accommodation in Cambridge (swampy 3,500 year old English city, not the one in Massachusetts) I have been lacking space to do practical projects. 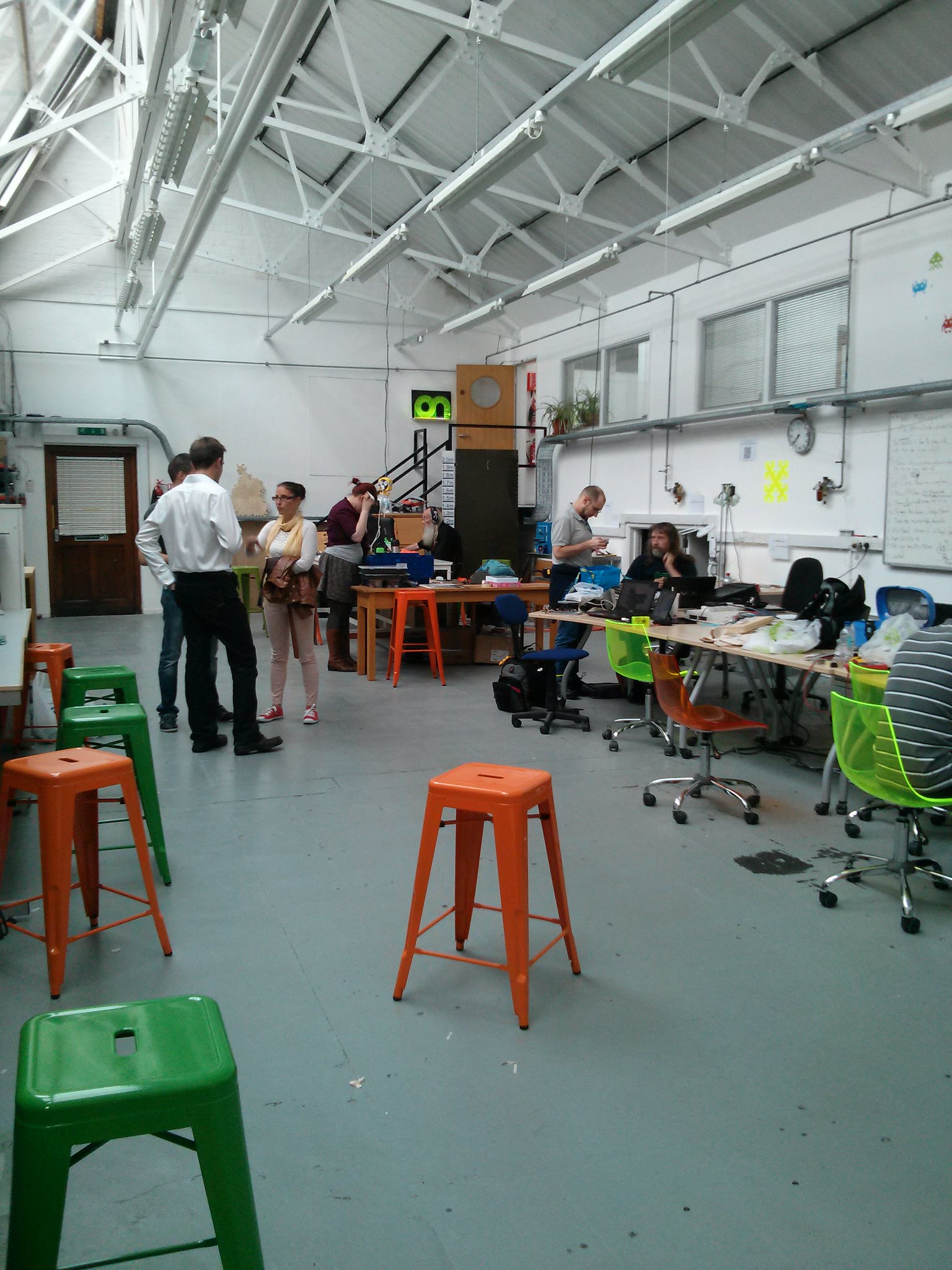 To fix this lack I have joined the cambridge makespace which, in addition to somewhere I can work gives me access to some tools I was previously unable to afford. The space gives practical training on the more complex machines (any tool can be dangerous if you do not use it correctly) which recently allowed my induction on the CNC router.

My instructor , Mark Mellors, who was good enough to give up some of his valuable making time to train me (and accidentally get his car stuck in a car park overnight by staying late) suggested that it was a good idea to have a design to try.

I decided to use this opportunity to actually create something useful (though now I re-read Marks message it did suggest a simple design...oopsy). I had been working at the electronics bench in previous weeks and been uncomfortable using the existing stools and chairs as they were either a bit high or unable to be adjusted high enough for the 80cm tall benches. I decided to design a 60cm tall stool for use at this workbench.

My initial idea was for a simple three leg stool, round top, three legs, how hard could it be? Initial research showed that showed that above 30cm the legs needed to be braced to each other. This is because the leg to seat joints simply cannot handle the stress caused by leverage which longer legs introduce.

I looked at the structure of several stools online and was initially drawn towards creating something like the IKEA Dalfred bar stool. It was discovered that the design would be easier to realise if it were made from sheet material which give a smaller challenge to a naive operator of a CNC router. Because of this simpler designs were researched and I eventually found a simple design I liked.

The design could not however be used directly as it was for imperial sized material which is not available in europe. I selected the QCAD open source CAD package and recaptured the design adjusting for the available 12mm plywood sheet material. This resulted in an imperial measurement design for metric materials.

Mark helped me transfer the DXF into the CAM software (vcarve pro 7, after I discovered the demo version of this software generates files which cannot be imported into the full edition!) and generate toolpaths for our machine. Once the toolpaths are saved to a USB stick (no modern conveniences like direct upload here) the job can be run on the machine.

Here I ran into reality, turns out that tolerances in imperial combined with lack of understanding how plywood reacts resulted in excessive play in the joints. This resulted in an unusable stool, which simply tried to rotate around its central axis and become flatpack. I had successfully turned £10 worth of plywood into some sawdust and a selection of useless shapes. On the other hand I did become competent with the router workflow so it was not a complete failure.

I was determined to make the design work so I decided to start from scratch with a similar design but entirely in metric. I performed some material research both online and practically (why yes i did spend an informative hour in several cambridge DIY shops with digital calipers, why do you ask?)  it  turns out that generally available 12mm thick plywood actually ranges between 11.9 and 12mm thick.

I did some test slot cuts of varying width and determined that the available stock can be "persuaded" to fit into a 11.8mm wide slot. This Interference fit joint is strong and removes the need for adhesive in most cases. 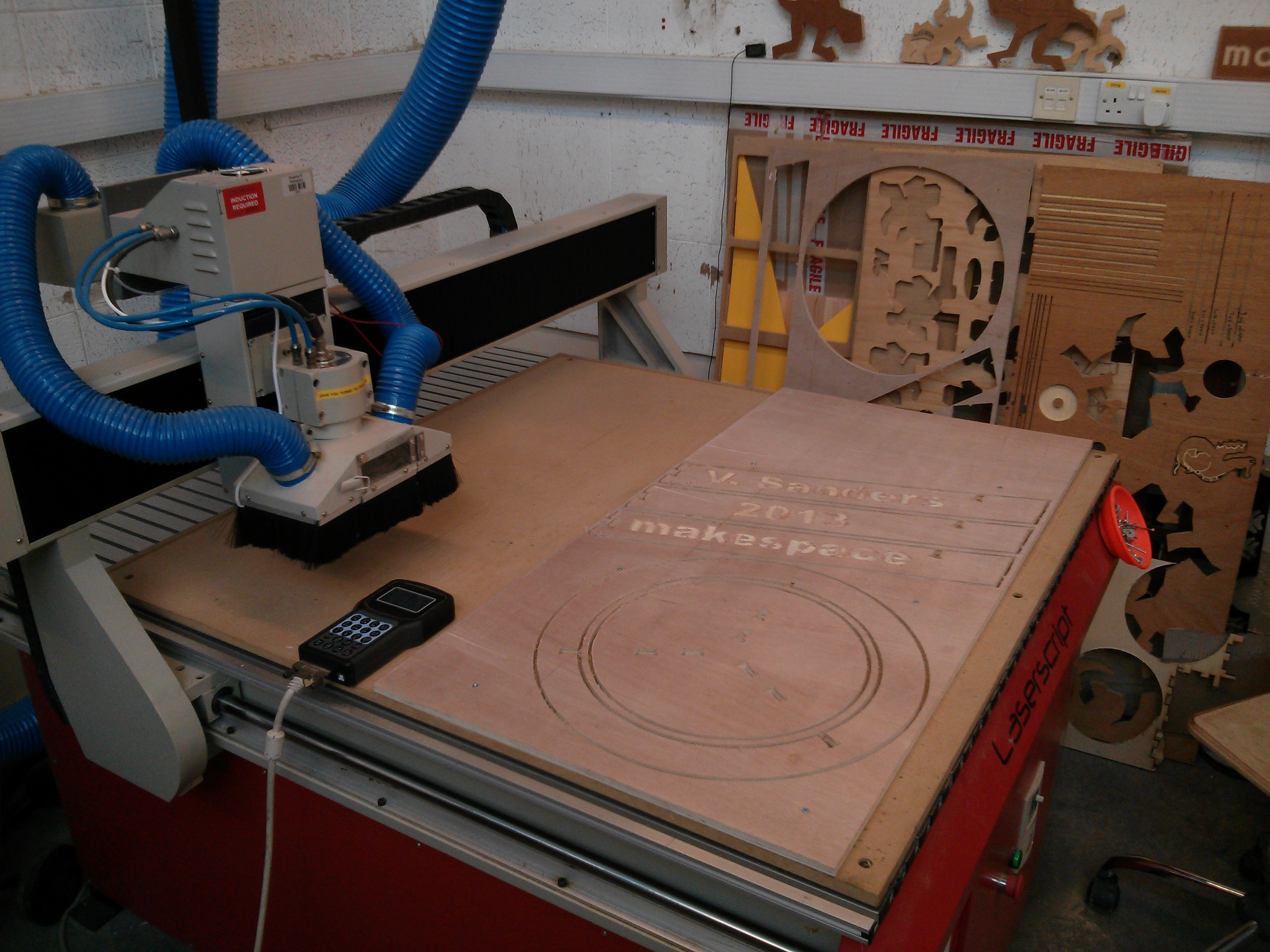 The sheet plywood material is readily available with a width of 1220mm and a height of 606mm (a full sheet is 2440mm long which is cut into four with a 4mm wide saw blade) so making the legs fit within a sheet and be close to the 60cm target should be possible.

I selected a suitable seat radius (175mm) and from that determined the minimal gap to the base ring with a 6mm end mill tool (20mm for two toolpaths and some separation) and hence the minimum suitable width of the base ring (50mm) giving a total radius of 245mm.

For the legs allowance was made for two joints of 30mm with 30mm separation between them the legs come out at 90mm width. If a 6mm space and a 6mm toolpath top and bottom of the sheet is accounted for a 582mm height (606 - 24) is available in which to fit the legs. The top of the leg which fits into the seat is 12mm tall leaving 570mm total leg height. 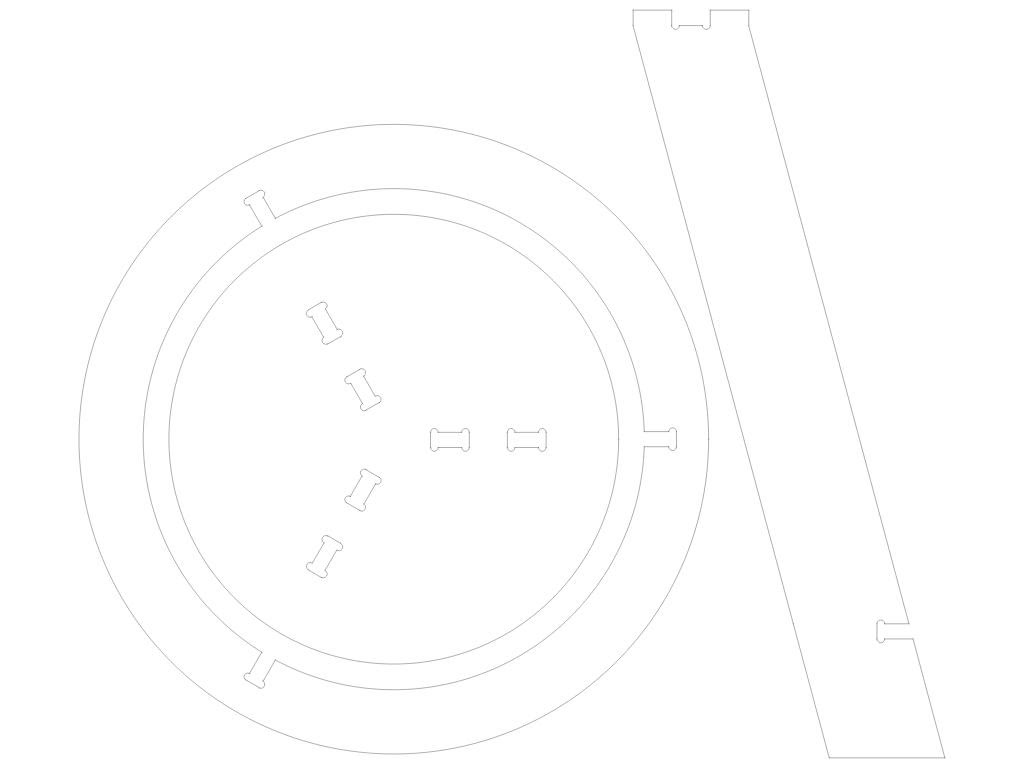 At this point I selected some arbitrary values for the leg positioning and angle (30mm from seat centre and 15°) using a right angle triangle triganometry this produced a stool with a base of around 550mm or 100mm outside the radius of the seat. This seemed a pleasing shape and when the values for the holding ring were calculated it is at 104mm height which also seems to work out well.

This design was cut on the machine, lightly finished with some sandpaper and assembled. The legs slotted into the ring first and then the legs eased into the seat slots, the whole thing flipped and the seat hammered home onto the legs. 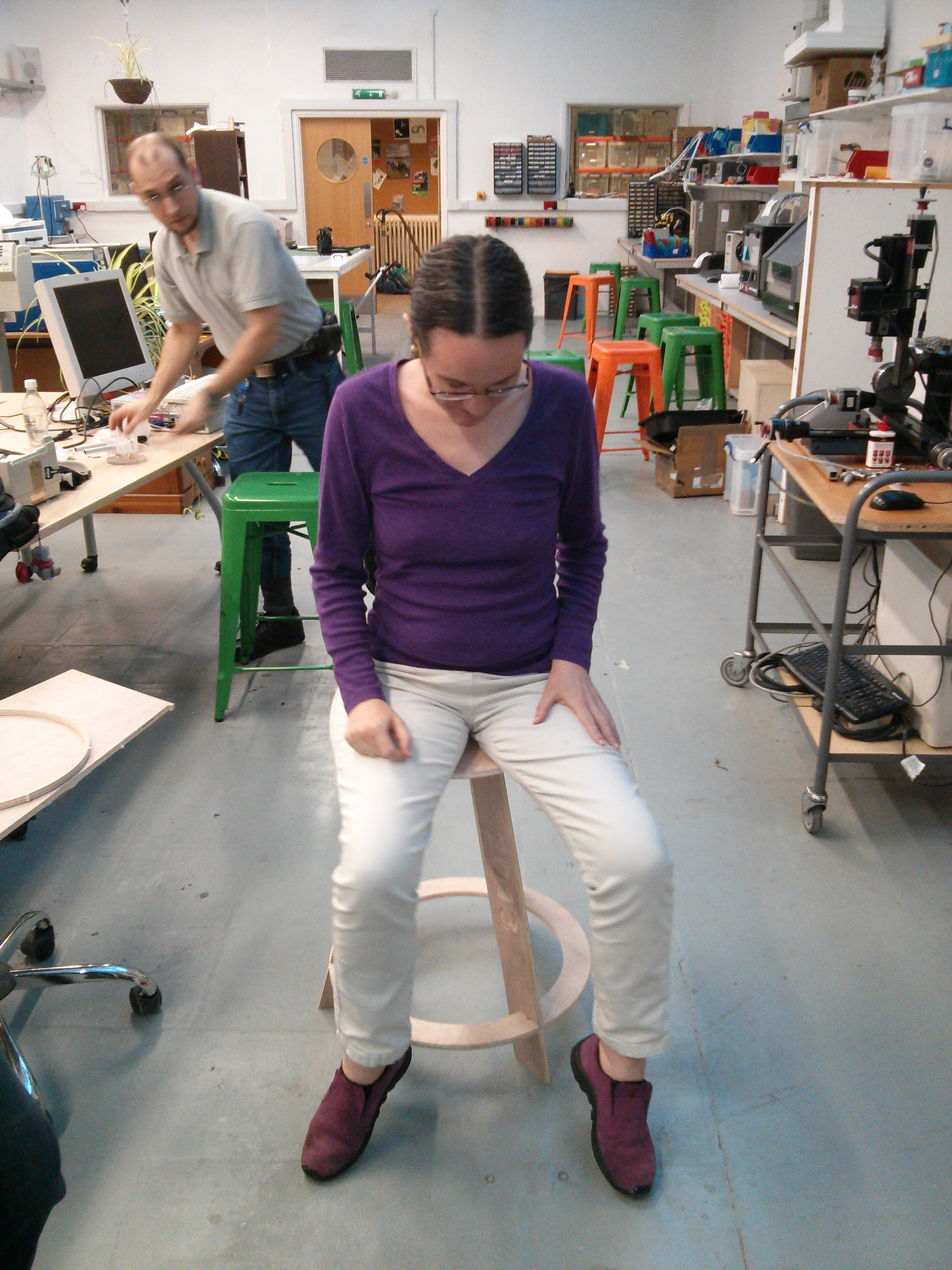 Success! It physically fit together and if you were brave enough you could sit on it. Unfortunately the plywood seemed to flex around the central axis of rotation in a rather alarming way, fine if you are under 70 kilos but not giving the impression of security most people want from their seating. 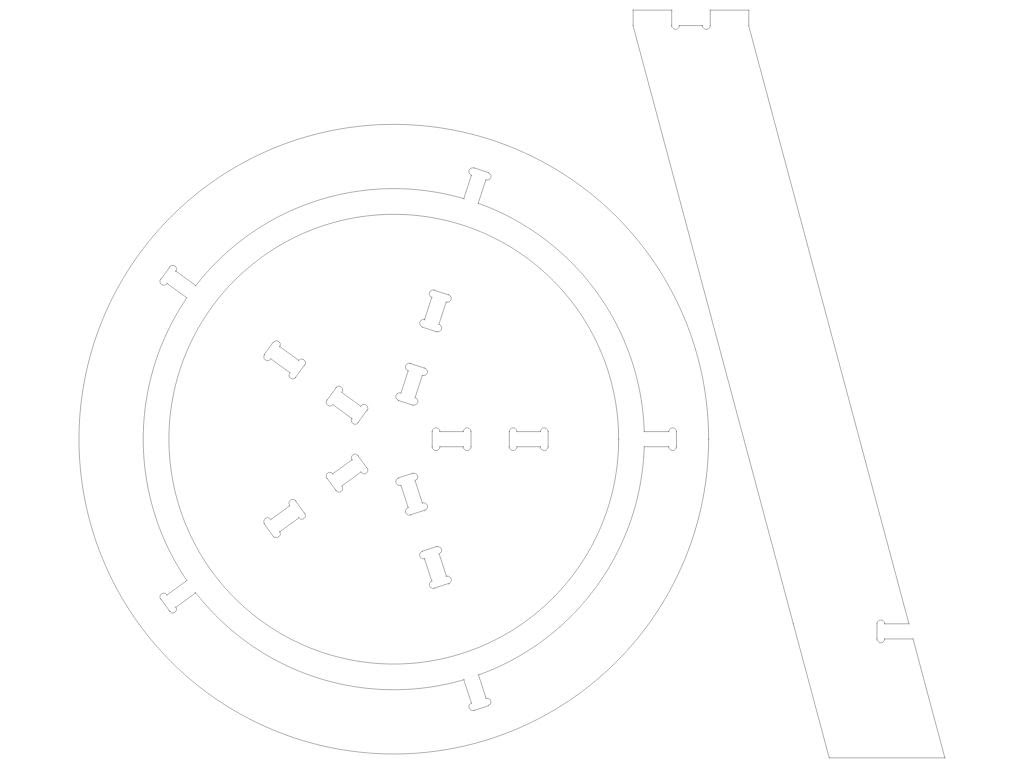 Ok, lets try with five legs instead of three (at least we can reuse the existing three legs)...nope still not good enough and another £10 gone. 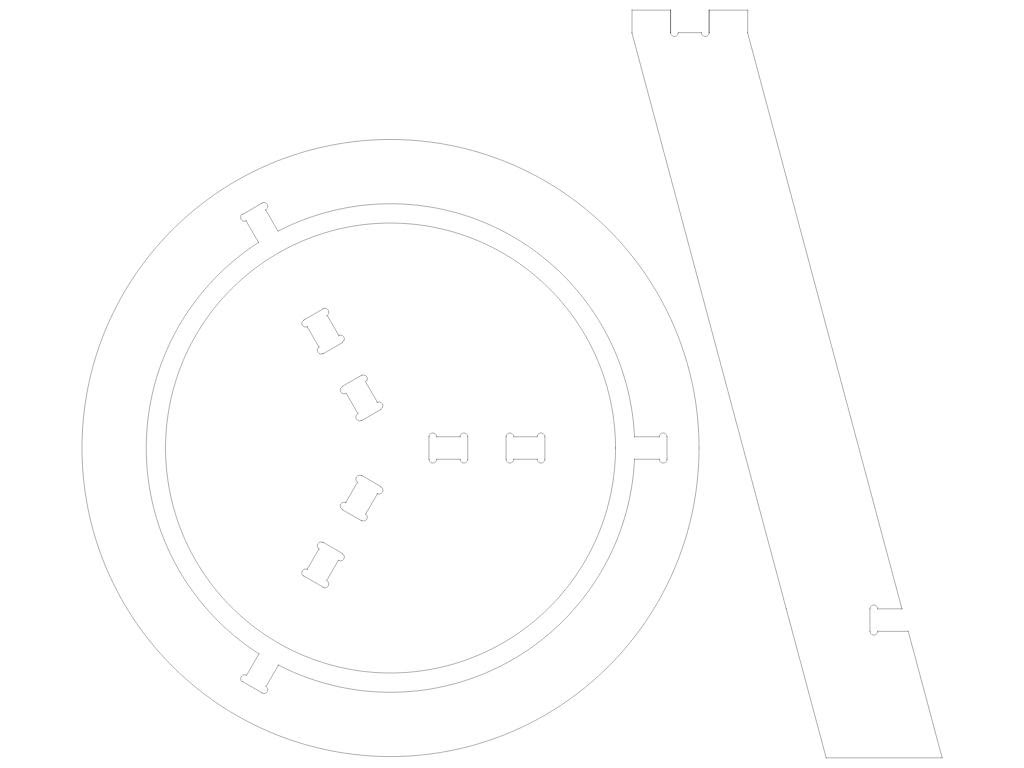 The others in the space suggested a few ideas to improve matters and the one I selected was to use 18mm plywood instead of 12mm, this should improve rigidity. There was a brief pause in proceedings to discover 18mm sheet is actually 17.7mm and needs a 17.5mm slot to make the interference fit work. 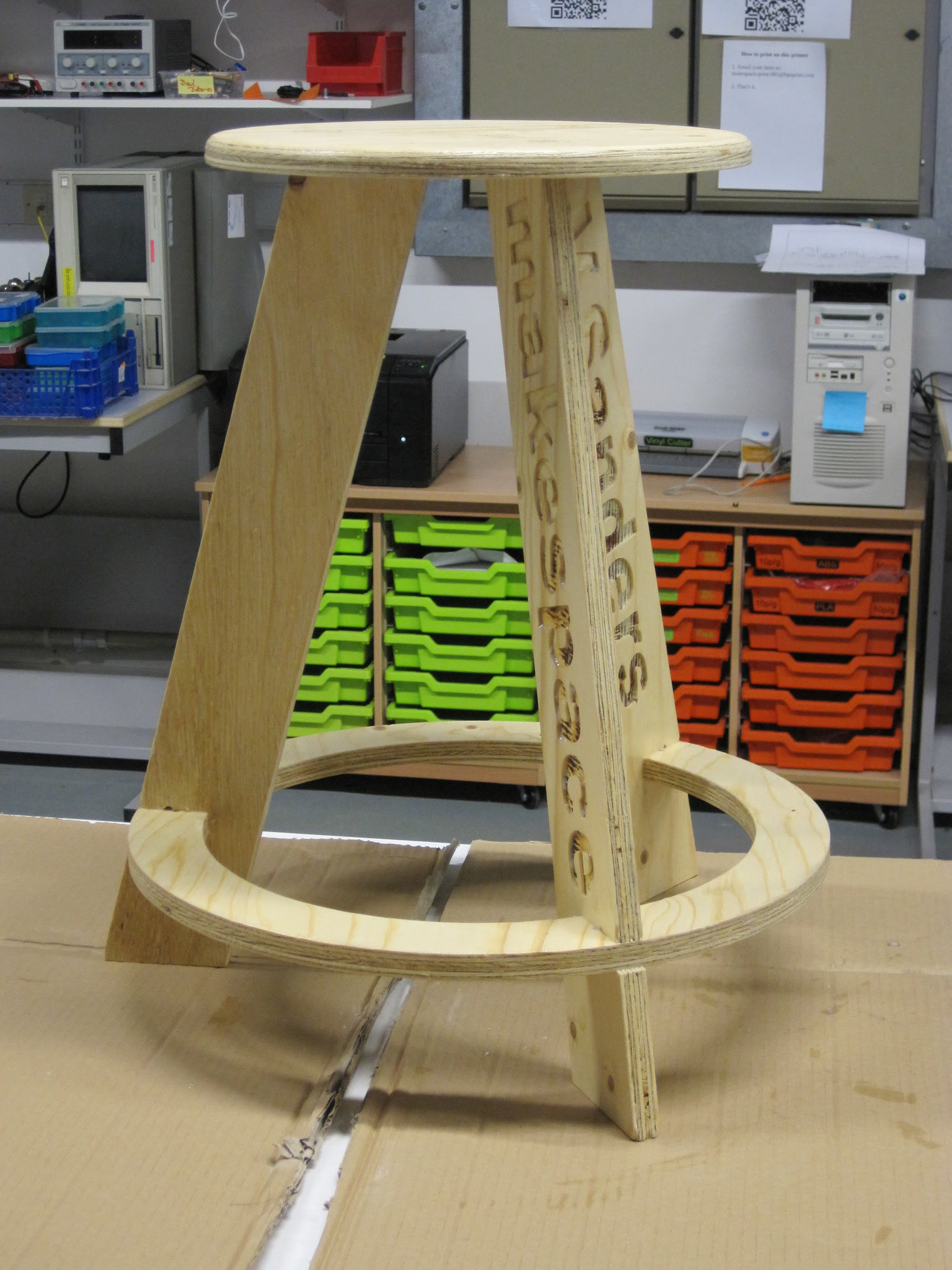 A swift redesign later altering the seat radius, gap, ring width and leg height to accommodate the new material and we have version 4 and it works without caveat. Tested up to 150Kg load without trouble, there is a small amount of flex still but nothing that feels worrying.

I finished the stool by rounding the seat top edge with a ball bearing rounding bit in a manual router and applying a couple of coats of gloss acrylic varnish. Finished stool is now doing service at the space.

In conclusion the final design allows someone with a CNC router to create a useful 580mm high fixed stool for £7.50 in timber plus cutter wear and varnish so maybe £8.50 total.

I am making the design files of the proven 18mm version available (heck they are all there...but you have been warned, none of the other solutions produce a satisfactory result) under the MIT licence so anyone can reproduce. More pretty pictures are also available.