You can't make a silk purse from a sow's ear

I needed a small Ethernet network switch in my office so went to my pile of devices and selected an old Dell PowerConnect 2724 from the stack. This seemed the best candidate as the others were intended for data centre use and known to be very noisy.

I installed it into place and immediately ran into a problem, the switch was not quiet enough, in fact I could not concentrate at all with it turned on. 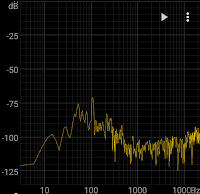 Believing I could not fix what I could not measure I decided to download an app for my phone that measured raw sound pressure. This would allow me to empirically examine what effects any changes to the switch made.

The app is not calibrated so can only be used to examine relative changes so a reference level is required. I took a reading in the office with the switch turned off but all other equipment operating to obtain a baseline measurement.

All measurements were made with the switch and phone in the same positions about a meter apart. The resulting yellow curves are the average for a thirty second sample period with the peak values in red.

The peak between 50Hz and 500Hz initially surprised me but after researching how a human perceives sound it appears we must apply the equal loudness curve to correct the measurement. 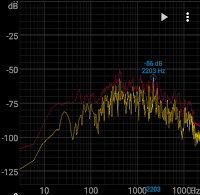 With this in mind we can concentrate on the data between 200Hz and 6000Hz as the part of the frequency spectrum with the most impact. So in the reference sample we can see that the audio pressure is around the -105dB level.

I turned the switch on and performed a second measurement which showed a level around the -75dB level with peaks at the -50dB level. This is a difference of some 30dB, if we assume our reference is a "calm room" at 25dB(SPL) then the switch is causing the ambient noise level to similar to a "normal conversation" at 55dB(SPL).

Something had to be done if I were to keep using this device so I opened the switch to examine the possible sources of noise.

There was a single 40x40x20mm 5v high capacity sunon brand fan in the rear of the unit. I unplugged the fan and the noise level immediately returned to ambient indicating that all the noise was being produced by this single device, unfortunately the switch soon overheated without the cooling fan operating.

I thought the fan might be defective so purchased a high quality "quiet" NF-A4x20 replacement from Noctua. The fan has rubber mounting fixings to further reduce noise and I was hopeful this would solve the issue. 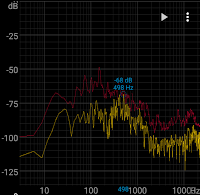 The initial results were promising with noise above 2000Hz largely being eliminated. However the way the switch enclosure was designed caused airflow to make sound which produce a level around 40dB(SPL) between 200Hz and 2000Hz.

I had the switch in service for several weeks in this configuration eventually the device proved impractical on several points:


In the end I purchased an 8 port zyxel switch which is passively cooled and otherwise silent in operation and has none of the other drawbacks.

From this experience I have learned some things: