Well that is the end of my time off, tomorrow it is back to work. However my break started with snow and it seems its finishing that way. 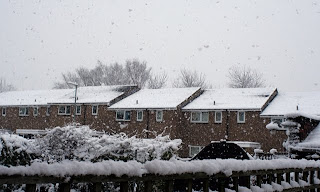 Unfortunately despite my previous enthusiasm this weather is becoming a little tedious. Schools have been closed today so I had to child mind instead of getting anything done.

Speaking of getting things done...I have completely failed to do anything productive whatsoever for the last couple of weeks. I have played some computer games, watched some TV read some books and listened to music and you know what? Aside from a tiny guilty feeling, I have thoroughly enjoyed myself.

I suppose I should apologize for not contributing to all those open source projects that could have used my help, but that would imply remorse which I seem to be lacking. Oh well

Mentioning music, I have acquired a selection of new music over the holiday which I ought to talk about. In no particular order:Unfortunately none of it was outstanding which sometimes happens when I take a punt on a large pile of new music. On the upside none of it was particularly bad either, so a kind of "no win" deal. Though on re-listening the "XX" album is starting to grow on me and the albums from the DFTBA label are so inexpensive they are more than worth it.
Posted by Vincent Sanders at 17:07 3 comments: