Healthy discontent is the prelude to progress

Despite the meteoric rise of many dot com companies in the early noughties a project either had to go it alone by running everything themselves or pick from a small selection of companies that had not yet worked out how to turn free hosting into money.

One such company, arguably the first, was VA Research with their SourceForge system. Many projects used their platform including a small niche web browser called NetSurf. For years the service was great, there were rough edges but nothing awful. 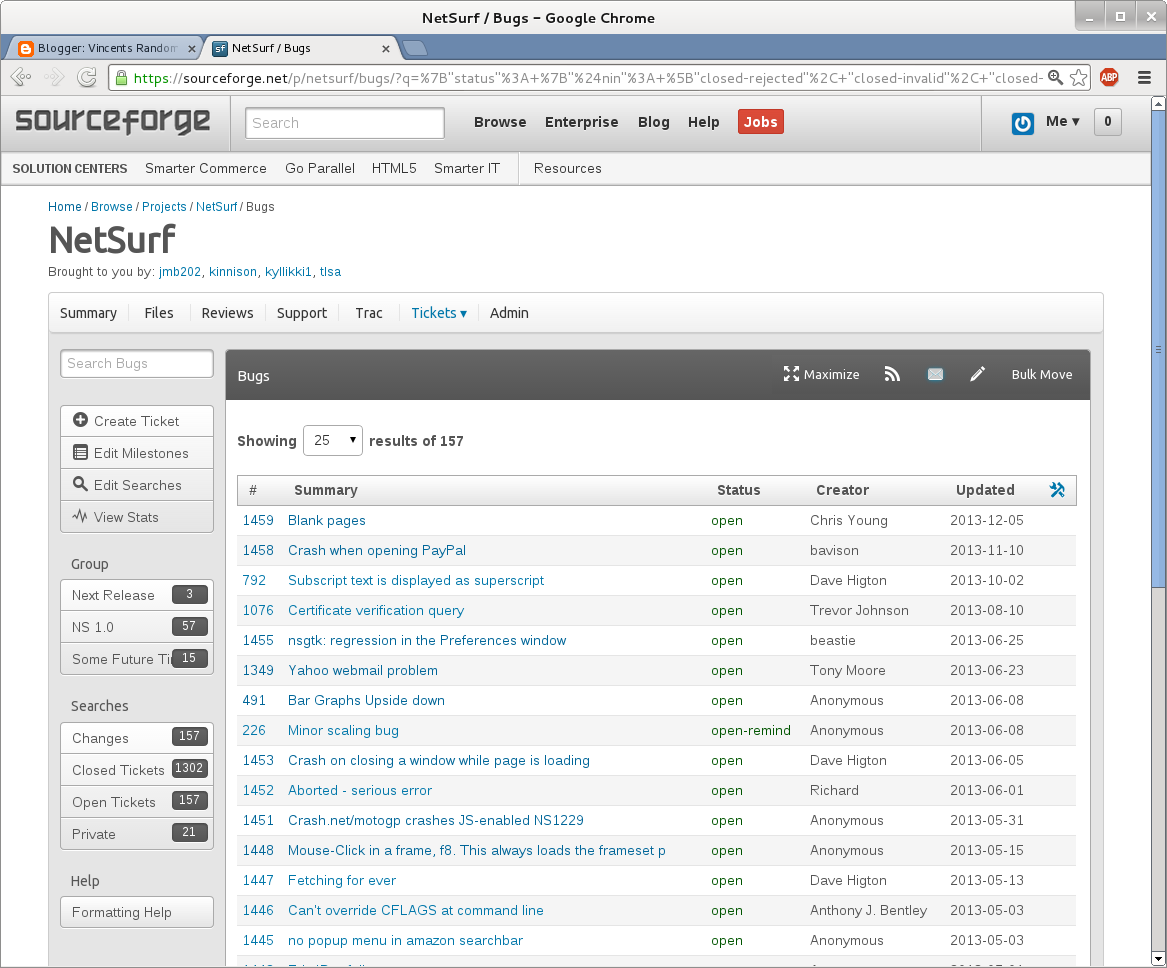 Over time the NetSurf projects requirements grew beyond what SourceForge could provide and service after service was migrated away eventually all that was left was the bug tracking system. This remained the state of affairs until mid 2013 when SourceForge forced a migration to their new platform which made them unsuitable for the projects use case.

Aside from the issue trackers questionable user interface SourceForge had started aggressively placing advertising throughout their platform. Some of the placements so inadvisable that projects started taking the decision to leave.

While I appreciate that SourceForge had to make money to provide a service they appear to have sown discontent within a large part of their user base without understanding that there are a number of alternatives solutions with a much less onerous funding model.

NetSurf used this as an opportunity to move the remaining issue tracking service to our own infrastructure. Rob Kendrick proceeded to evaluate several solutions and in December 2013 I finally found the time to migrate an XML dump of the old data from SourceForge into MantisBT.

Migrating data from one database into another via incompatible formats took me back to my roots. My early career started with programming tasks moving historical business data from ancient large systems which were about to be scrapped to modern Sparc based systems. Later I would be in a role where financial data needed to be retrieved from obsolete proprietary systems and moved into databases on x86 servers.

My experience in this field was not really stretched as it turns out that modern systems can process a few tens of megabytes in seconds rather than the days for a run in my youth! So some ugly perl scripts and a few hours later I had a nice shiny SQL database filled with NetSurfs bugs and MantisBT instance configured to use them. 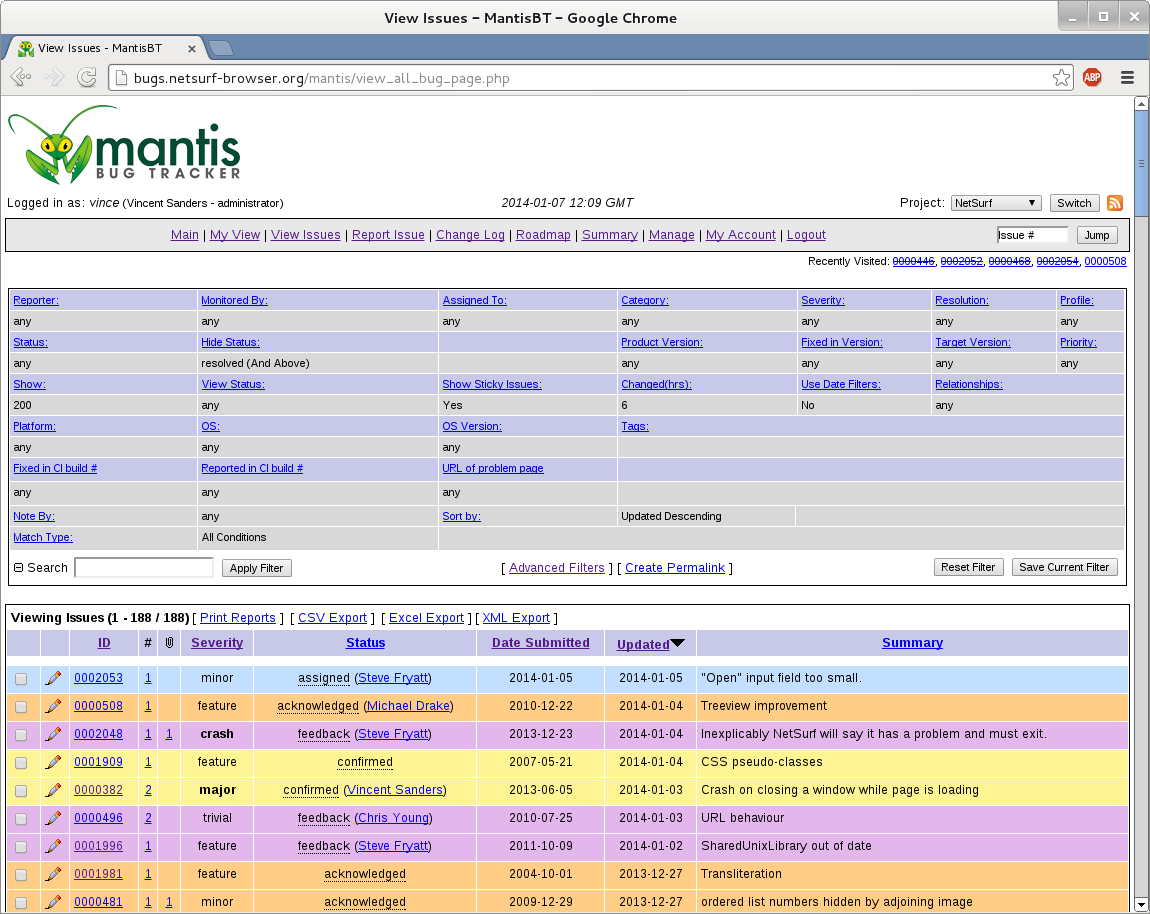 Then came the hard bit, triaging all the open bugs, fixing up all the bugs submitted as an anonymous user but with email addresses in, removing duplicates and checking every open bug was still valid took almost two weeks of tedious drudge.

I set up an initial bug workflow within the system that the project developers are still fine tuning to better suit their needs but overall Mantis is proving a very flexible tool. The main deficiencies center around configuration for the projects useage, especially removing unused fields from filters and making the workflow more intuitive..

The resulting system is now getting bug reports submitted again where the sourceforge system had had three in the six months since the forced migration.

The issue tracker is once more a useful tool for the developers allowing us to focus on areas actually causing problems for our users and allowing us to see progress we are making fixing issues.

Overall this was a successful migration and provides a platform the NetSurf project can control where we can offer guarantees to our users about their personal information usage and having a clean rapid interface with no advertisements.
Posted by Vincent Sanders at 17:00 4 comments: 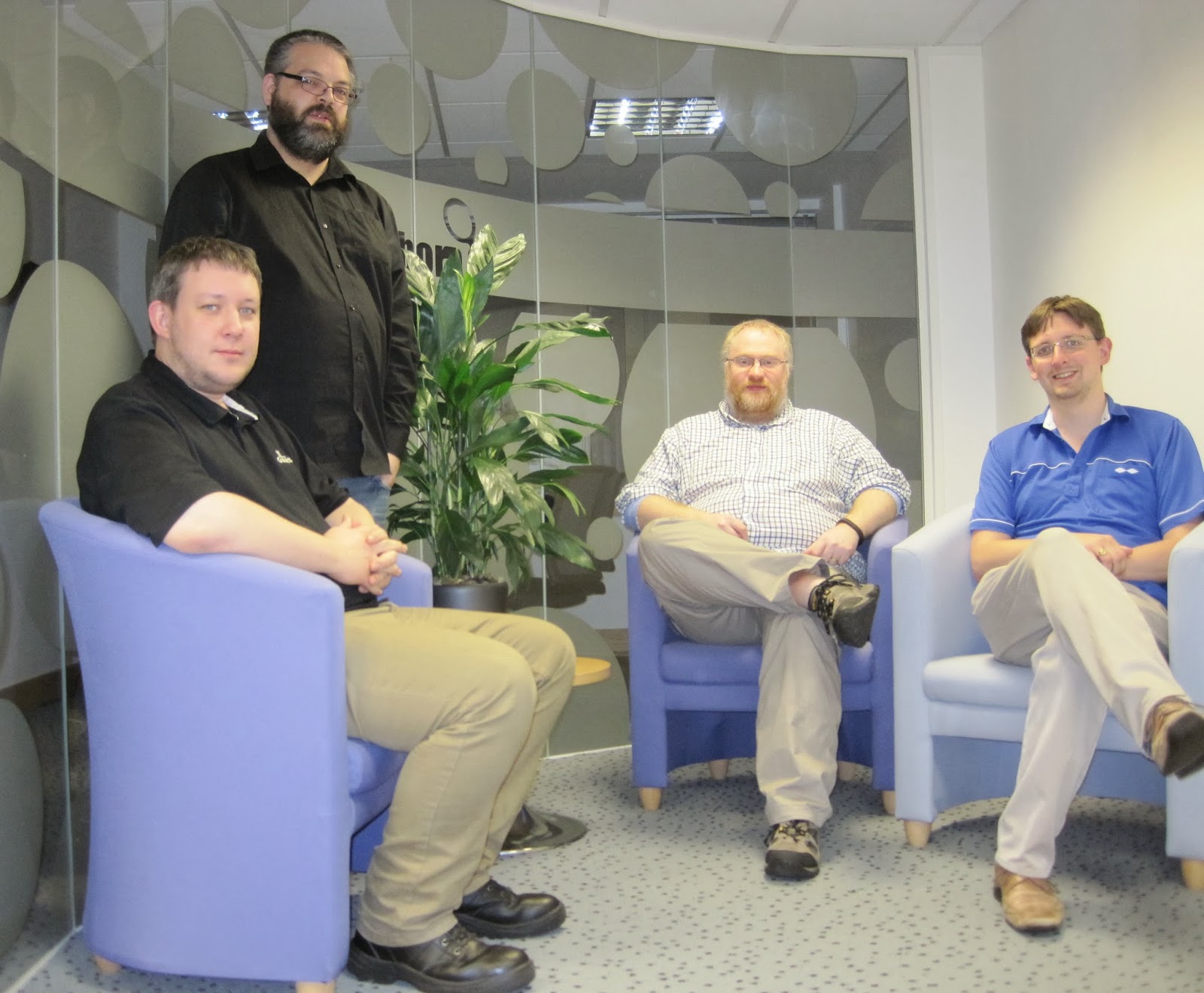