If I have a style, I am not aware of it.

I wish I had known about that quote from Michael Graves before now. I would have perhaps had an answer to some recent visitors to makespace.

There are regular scheduled visits to makespace where people can come and view our facilities, and perhaps start the process of becoming a member if they decide they like what they see. 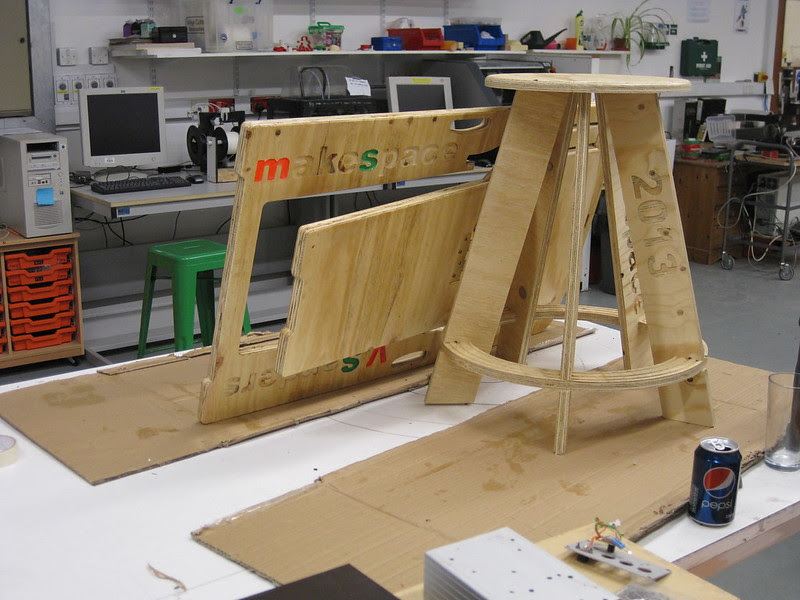 However, we sometimes get people who just turn up at the door. If a member feels charitable they may choose to give a short tour rather than just turn the person away. I happened to be in one Friday afternoon recently varnishing a folding chair when two such people rang the doorbell. There were few other members about and because watching varnish dry was dull I decided to be helpful and do a quick tour.

I explained that they really ought to return for a scheduled event for a proper tour, gave the obligatory minimal safety briefing, and showed them the workshops and tools. During the tour it was mentioned they were attending a certain local higher education establishment and were interested in makespace as an inexpensive studio.

Before they left I was asked what I was working on. I explained that I had been creating stools and chairs from plywood. At this point the conversation took a somewhat surreal turn, one of them asked, well more demanded, who my principle influence had been in designing with plywood.

When I said that I had mainly worked from a couple of Google image searches they were aghast and became quite belligerent.  They both insisted I must have done proper research and my work was obviously influenced by Charles and Ray Eames and Arne Jacobsen and surely I intended to cite my influences in my design documents.

My admission that I had never even heard the names before and had no design documents seemed to lead to a distinctly condescending tone as they explained that all modern plywood design stemmed from a small number of early 20th century designers and any competent designers research would have revealed that.

At this point in proceedings I was becoming a bit put out that my good deed of showing off the workshop had not gone unpunished. I politely explained that I designed simply by generating a requirement in my head, maybe an internet search to see what others had done, measuring real things to get dimensions and then a great deal of trial and error.

I was then abruptly informed that my "design process was completely invalid and there were well established ways to design furniture correctly and therefore my entire design was invalid" and that I was wasting time and material. I thanked them for their opinion and showed them out, safe and well before anyone gets any ideas. 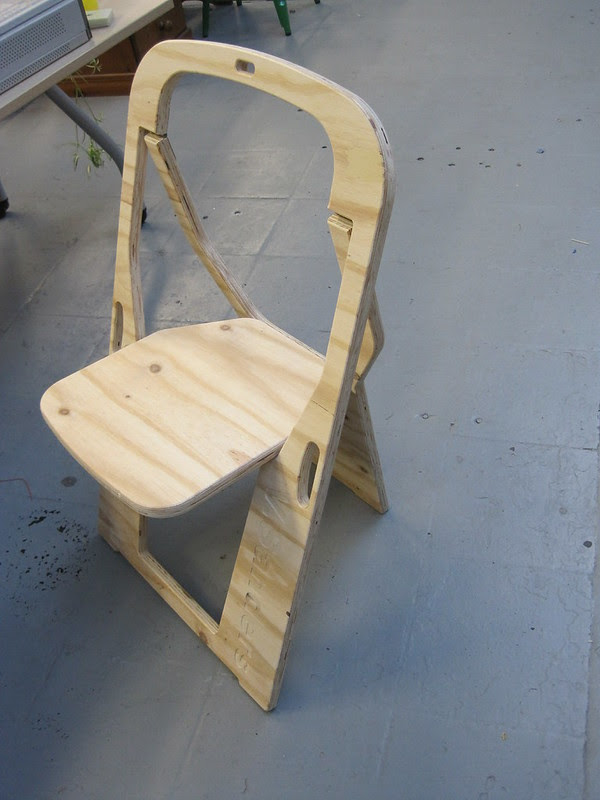 I put the whole incident out of my mind until I finished writing up the final folding chair post the other day. It struck me that perhaps I had been unknowingly influenced by these designers. It was certainly true I had generated ideas from the hundreds of images my searches had revealed.

I did some research and it turns out that from the 1930s to the 1950s there were a string of designers using plywood in novel ways from the butterfly stool by Sori Yanagi through formed curvy chairs by Alvar Aalto and eero saarinen.

While these designers produced some wonderfully iconic and contemporary furniture I think that after reviewing my initial notes that two more modern designers Christian Desile and Leo Salom probably influenced me more directly. Though I did not reference their designs beyond seeing the images along with hundreds of others, certainly nothing was directly copied.

And there in lies an often repeated observation: no one creates anything without being influenced by their environment. The entire creative process of several billion ape descendants (or Golgafrincham telephone sanitisers if you prefer) is based on the simple process of copying, combining and transforming what is around us.

I must accept that certain individuals at points in history have introduced radical improvements in their field, people like Socrates Galileo Leonardo Newton Einstein. However, even these outstanding examples were enlightened enough to acknowledge those that came before. Newtons quotation "If I have seen further it is by standing on the shoulders of giants" pretty much sums it up.

In my case I am privileged enough to live in a time where my environment has grown to the size of the world thanks to the internet. My influences, and therefore what I create, is that much richer but at the same time it means that my influence on others is similarly diminished.

I have joined the maker community because I want to create. The act of creation teaches me new skills in a physical, practical way and additionally I get to exercise my mind using new techniques or sometimes things I had forgotten I already knew. I view this as an extension of my previous Open Source software work, adding a physical component to a previously purely mental pursuit.

But importantly I like that my creations might provide inspiration for someone else. To improve those chances in the wider world I force myself to follow a few basic rules:

Release
Possibly one of the hardest things for any project. I carefully avoided the word finish here because my experience leads me to the conclusion that I always want to improve my designs.

But it is important to get to a point in a project where you can say "that is good enough to share", this is more common in software but it really applies to any project.

Share
If your aim here is to improve your society with your contribution sharing your designs and information is important. I think there is nothing better than someone else taking one of your designs and using it and perhaps improving on it, remember that is what you probably did in one way or another better to make it less hard for that to happen.

Ensure your design files are appropriately licensed and they are readily accessible. I personally lean towards the more generally accessible open source licences like MIT but the decision is ultimately yours.

Licencing is important, especially in the current copyright happy society. I know it sounds dull and no one takes that seriously, right? Sorry, but yes they do and it is better for you to be clear from the start, especially if there is a software component to your project. Oh one personal plea, use an existing well known licence, the world simply does not need another one!

Write about it
The blog posts about the things I have made sometimes take almost as much time as the creation.  The clear recording on my thoughts in written and photographic form often gives me more inspiration for improvements or other projects.

If someone else gets pleasure from the telling then that can only be good. If you do not do this then your voice cannot be heard and you wasted an opportunity to motivate others.

Feedback
If you do manage to get feedback on your creation, read it. You may disagree or not be interested for the current project but the feedback process is important. In software this often manifests as bug reports, in more physical projects this often becomes forum or blog comments.

Just remember that you need a thick skin for this, the most vocal members of any society are the minority with inflammatory opinion, the silent majority are by definition absent but there is still useful feedback out there.

Create again
By this I simply mean that once you are satisfied yourself on a project move on to the next. This may sound a little obvious but once you have some creative momentum it is much easier to keep going project to project than in you leave time between.

Also do not have too many projects ongoing, by all means have a couple so you do not get stuck waiting for materials or workshop time but more than three and four and you will never be able to release any of them.

Those students were perhaps somewhat misguided in how they stated their opinions, but they are correct that in the world in which we find ourselves we are all influenced. Though contrary to received wisdom those influences are more likely to be from the internet and our peers in the global maker society than historical artists.
Posted by Vincent Sanders at 11:16 1 comment: