For some time now Melodie has wanted more outside storage. 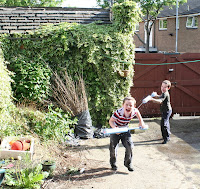 The current outhouse is an 3 foot by 8 foot converted outside toilet. Due to its age (built 1884) this building is no longer watertight and is generally disintegrating at an alarming rate. One day soon it will have to be demolished. That day has not yet arrived, instead we purchased a plastic shed.
Unfortunately the only viable place for the new shed was next to the old one, this required removing a six foot section of flower bed complete with ivy, bamboo and an old sink.
Last Saturday I completed this removal and lay a concrete base ready to take the new shed. You would not think such a small area (2.8m square) would require so much material and effort to concrete over. 300Kg of 3:2:1 aggregate:sand:cement concrete mix went into the hole along with 100Kg of instant set concrete (for a rapid surface in the changable weather). 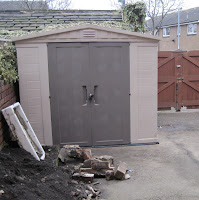 Thursday afternoon Geoff (my nice helpful neighbour) offered to assist me in the assembly of the shed. I re-arranged my work schedule (yay home working) and after three hours the shed was assembled.
This morning it occurred to me that my webcam had recorded a time-lapse movie of the construction. I uploaded it to YouTube and present it here for your amusement.
Posted by Vincent Sanders at 11:30 3 comments:

It is a bit breezy

The weather has been a bit odd round here for a while now. The snow storms in December and early January were a mild inconvenience for me but as I work from home the advice not to travel was not too much of a problem. 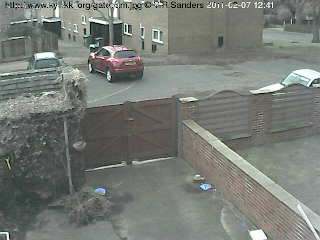 It seems however that now February is here and the snow is gone we are in for some pretty strong storms. This actually affected me today when my neighbours garden wall was blown over! 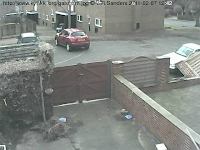 As you can see my nice new IP camera captured the event, well OK the frame before and after but you get the idea. Unfortunately for my neighbour the wall collapsed onto his pickup causing extensive damage.
A short time later when my weather station was recording gusts well over 50mph nearby drains started flowing the wrong way and it became a case of water, water everywhere!

It seems that when the new buildings were erected a few years ago that the architect while maximising used space on the building plot may have inadvertently created something of a wind tunnel.
The Gap between our properties is on a parallel (north to south) to the valley below. The wind seems to travel along the crest of the valley and be funnelled through any spaces between the houses. Fortunately the rest of the properties on green lane are pretty old and the spacing between is very generous and the funnelling effect is minimal.
I wonder if we could fit a wind turbine in there? Alas it was too much for my secondary anemometer which is now smashed in three parts.
Also gaining access to the gable end wall of my property has become somewhat perilous (Hence the wonky APT antenna I cannot get fixed). Yes that really is a guy balancing on a ladder 10m high in a strong wind. And indeed the platform the ladder is resting on is built from scaffolding board wedged between the houses.
I guess the hospital emergency room being 300m away means medical assistance is on hand, even so he is braver than I am. So my weather satellite imagery will just have to come from the internet like everyone else's for a while.
Posted by Vincent Sanders at 22:29 2 comments: