I designed clip cases for many of these systems giving me a higher storage density on my rack shelves and built a power supply to reduce the cabling complexity. These helped but I still ended up with a cluttered shelf full of SBC.

I decided I would make a rack enclosure to hold the SBC, I was limited to material I could easily CNC machine which limited me to acrylic plastics or wood. 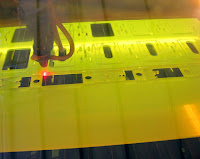 Initially I started with the idea of housing the individual boards in a toast rack arrangement. This would mean that the enclosure would have to be at least 2U high to fit the boards all the existing cases would have to be discarded. This approach was dropped when the drawbacks of having no flexibility and only being able to fit the units that were selected at design time became apparent (connector cutouts and mounting hole placement.

Instead I changed course to try and incorporate the existing cases which already solved the differing connector and mounting placement problem and gave me a uniform size to consider. Once I had this approach the design came pretty quickly. I used a tube girder construction 1U in height to get as much strength as possible from the 3mm acrylic plastic I would use.

The design was simply laser cut from sheet stock and fastened together with M3 nut and bolts. Once I corrected the initial design errors (I managed to get almost every important dimension wrong on the first attempt) the result was a success.

The prototype is a variety of colours because makespace ran out of suitably sized clear acrylic stock but the colouring has no effect on the result other than aesthetical. The structure gives a great deal of rigidity and there is no sagging or warping, indeed testing on the prototype got to almost 50Kg loading without a failure (one end clamped and the other end loaded at 350mm distance)

I added some simple rotating latches at the front which keep the modules held in place and allow units to be removed quickly if necessary.

Overall this project was successful and I can now pack five SBC per U neatly. It does limit me to using systems cased in my "slimline" designs (68x30x97mm) which currently means the Raspberry Pi B+ style and the Orange Pi PC.

Once small drawback is access to I/O and power connectors. These need to be right angled and must be unplugged before unit removal which can be a little fiddly. Perhaps a toast rack design of cases would have given easier connector access but I am happy with this trade off of space for density.

As usual the design files are freely available, perhaps they could be useful as a basis for other laser cut rack enclosure designs.
Posted by Vincent Sanders at 10:29 1 comment: