Actually I can not really be called a Luddite because I am not really against telecommunication progress nor do I fear it will negatively effect my employment...but the title sounded good? ;-)
Anyhow, I have a strange relationship with mobile phones. My ability to have a functioning device has historically limited their usefulness to me.
Because of my low usage and odd attitude for a techie I have always used PAYG for my personal phone. Work may have provided me with a device with a contract for being on-call etc. but in general its been PAYG all the way. My first phone was a Nokia 1610 back in the late nineties, second user after my employer at the time contract upgraded and had a load of "leftovers". I paid 50quid for it and bought a ten quid SIM and ten pounds credit. 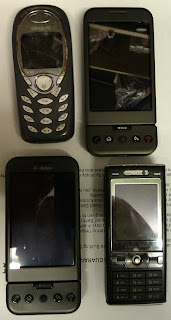 The standing joke among my friends for the next decade has been that whatever provider I moved to they would go out of business within the year. I went through about eight providers in ten years. And for the first six the same tenner credit went with me! Each time the PAYG provider folded etc. I would be moved on to someone new with a tenners credit and a new SIM and number.
After Easy Mobile closed they did not have an option of a new provider with credit and the "recommended" provider was very poor, so this time I shopped around and went with Tesco mobile but remembered to take my number, which did at least stop my colleagues making fun of me for another move.
During this period my phones were no better than my providers. I bought a Nokia 1100 and used other peoples leftovers. Culminating in Daniel Silverstone taking pity on me and giving me his Sony Ericsson K800 at the end of his contract, despite acquiring an ADP1 and a G1 (both have which have dropped dead) this is the phone I have been using for three years now.
Due to my dreadful relationship I did not get the most from the technology and felt like I was missing out. Over the last few years to try and address this I have set myself a target of having a phone physically with me, turned on and in credit at all times. This I have finally managed for a whole six month stretch and as a reward I have bought myself a nice Android based smartphone on contract with T-Mobile.
I have done all the administrative things to port the number so no-one will need to alter their address books :-)
After only a few days of usage I have already discovered why the combination of smart phone and decent contract are so appealing. The freedom to just call and text and use the internet wherever you are without stopping to worry if you have enough credit is a wonderful thing. And decent hardware with the guarantee that if it breaks all I have to do is go into the store and they give me a new one.
I went for the HTC Wildfire instead of the Desire on cost grounds (100 pounds up front instead of 290) which seems perfectly reasonable hardware performance wise. My one and only niggle is T-mobile have nobbled the media player so it only plays some mp3s and not oggs or flacs. No real challenge, just a bit disappointing that vendurs seem to think they need to fiddle.
Posted by Vincent Sanders at 13:12 1 comment:

I, along with a great number of people I know, now posses a 3rd generation Kindle. It seems Amazon have found a feature set and price point which makes this device a winning solution. 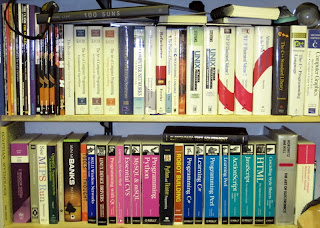 I did look at a huge number of alternatives like the Sony PRS600 and others but they were all more expensive than the £110 for the Kindle and did not have enough features to make a compelling argument for spending more.
Yes it has DRM. Yes it "only" supports PDF, MOBI and mp3. Yes it will not win any style or usability awards. But I went into this eyes open the device is "good enough".
The device lets me read books from a reasonable display. The integration with amazon.com is so seamless it poses a serious danger to my bank account. I should expand on that last point :-) Amazon have got the whole spending money for a book thing executed so well that you do not think twice about a couple of pounds here and there, this soon adds up. I have set myself a rigid budget.
My main complaints are really just niggles:


However my one and only real complaint with the offering as a whole is the astronomical asking price for the leather cover. The cover is currently 25% of the price of the kindle itself! (£30 cover £110 kindle) which is just silly. It is a pretty nice cover and the clever clip attachment means it does offer an integrated solution to protecting your kindle, but not £30 nice.

So my lovely wife (her kindle was bought with the cover) made me a sock for mine. This is great for casual round the house usage to stop me scuffing the screen but was a bit lightweight for protecting the kindle when out and about.
One day last week I had an idea. I would make my own protective cover by crafting something I had wanted to do for ages. And the (unoriginal I am sure) project of a hollowed out book for housing my kindle was implemented. 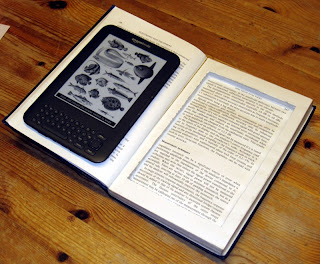 A quick Google later and I had a set of plausible instructions to follow. I used possibly the most out of date book ever (published 1981) on electronic test equipment, partly because it was a ex library sell off book which cost 10pence back in 1995 but mainly because it was the right size to just enclose the kindle without adding to much size.
I learnt a couple of things doing this:
All in all I kinda like the results and I think I will try again with a more modern book where the spine is not so broken to begin with.
Posted by Vincent Sanders at 11:54 5 comments: