I have to agree with John Burnside on that statement, after having recently moved house again rediscovering our book collection has been a salve for an otherwise exhausting undertaking. I returned to Cambridge four years ago, initially on my own and then subsequently the family moved down to be with me. 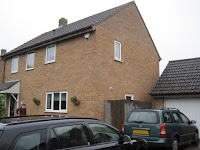 We rented a house but, with two growing teenagers, the accommodation was becoming a little crowded. Melodie and I decided the relocation was permanent and started looking for our own property, eventually finding something to our liking in Cottenham village.

Melodie took the opportunity to have the house cleaned and decorated while empty because of overlapping time with our rental property. This meant we had to be a little careful while moving in as there was still wet paint in places. 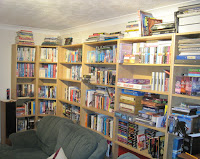 Moving weekend was made bearable by Steve, Jonathan and Jo lending a hand especially on the trips to Yorkshire to retrieve, amongst other things, the aforementioned book collection. We were also fortunate to have Andy and Jane doing many other important jobs around the place while the rest of us were messing about in vans.

The seemingly obligatory trip to IKEA to acquire furniture was made much more fun by trying to park a luton van which was only possible because Steve and Jonathan helped me. Though it turns out IKEA ship mattresses rolled up so tight they can be moved in an estate car so taking the van was unnecessary.

Having moved in it seems like every weekend is filled with a never ending "todo" list of jobs. From clearing gutters to building a desk in the study. Eight weeks on and the list seems to be slowly shrinking meaning I can even do some lower priority things like the server rack which was actually a fun project.

The holidays this year afforded me some time to finish the boys bedrooms. They both got loft beds with a substantial area underneath. This allows them both to have double beds along with a desk and plenty of storage. Completing the rooms required the construction of some flat pack furniture which rather than simply do myself I supervised the boys doing it themselves. 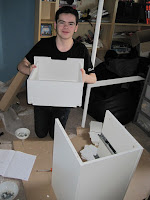 Teaching them by letting them get on with it was a surprisingly effective and both of them got the hang of the construction method pretty quickly. There was only a couple of errors from which they learned immediately and did not repeat (draw bottoms having a finished side and front becomes back when you are constructing upside down) 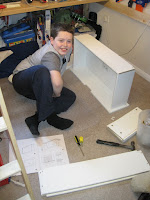 The house is starting to feel like home and soon all the problems will fade from memory while the good will remain. Certainly our first holiday season has been comfortable here and I look forward to many more re-reading our books.
Posted by Vincent Sanders at 16:31 16 comments: 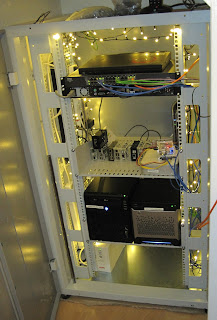 Now I just have to finish putting all the systems in there and I will be able to call the project a success.
Posted by Vincent Sanders at 11:33 3 comments:

I recently presented a talk at the Debian miniconf in Cambridge. This was a new talk explaining what goes on in a web browser to get a web page on screen.

The presentation was filmed and my slides are also available. I think it went over pretty well despite the venues lighting adding a strobe ambiance to part of proceedings.

I thought the conference was a great success overall and enjoyed participating. I should like to thank Cosworth for allowing me time to attend and for providing some sponsorship.
Posted by Vincent Sanders at 09:39 2 comments: