I seem to be adhering to Beckett's approach recently but for some reason, after my previous stool attempts, despite having a functioning design I felt I had to do just one more iteration. 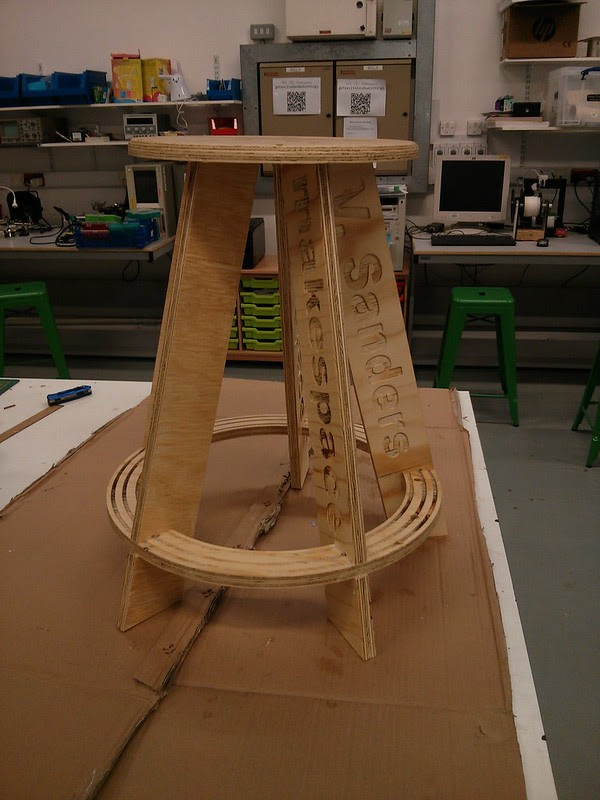 Going back to a previous concept of having five legs instead of three while this did not improve the rotational problems with the 12mm thick material, it did make the design more stable overall and less prone to tipping.

The five legged solution realised in 18mm plywood resulted in my final design for this concept. As my friend Stephen demonstrates the design is pretty solid even for those of us with a more ample frame. There are now a couple of them in use at the space alongside the three legged earlier versions.

I was finally satisfied with the result and thought I was done with furniture making for a while. My adorable wife then came up with a challenge, she wanted a practical foldable chair her requirements were:

Things for individual humans to sit on raised off the floor, or chairs as we call them, have been around for a long time. My previous research for the stool indicated that chairs have a long history with examples still surviving from the ancient egyptians. From this I assumed there would be nothing novel in this project and to quote the song it's all been done before Given this perspective my research started with an image search for "folding chair". The results immediately showed there were two common shapes. Either the chair base was formed with a pair of linked X shapes with the seat across the top, or an A frame style where the seat is across the centre.

My initial thoughts were to replicate the IKEA style A frame design until I noticed that some designs were made from a single sheet of timber with a small number of profile cuts. I searched for pre-existing design files but found none, perhaps I had found something novel to do after all.

Some quick measurements of chairs in shops (and more weird looks, mainly from my family) suggested 900mm is generally the highest a chair ought to stand. I selected a popliteal height of 420mm as a general use compromise which is a bit less than the 430mm of most mass produced chairs. I also decided there should be a front to rear drop across the seat which ought to improve comfort a little.

Material selection was based upon what I had to hand which consisted of a couple of sheets of structural plywood (1220x606x18mm temperate softwood - probably spruce although not specified) which had not become stools yet. Allowing for edge wastage and tool width this gave me a working area from a sheet of 1196x582mm.

I sketched the side view of the chair numbering the three parts. I decided part 1 would be 1000mm total height with top and bottom cross braces 80mm high, assuming the 900mm tall target, the A frame apex would be at 820mm height.

If we assert that the apex is immediately below the top cross brace on part 1 this gives 920mm at which point we have two sides of a right angled triangle (820 and 920) from which we can calculate the top angle is 26°. This also means part 2 will be 840mm long with the same 820 height this gives an angle of 10°.

I did the maths for the seat triangle using the 36° angle and 420mm popliteal height. Having experienced how flexible 18mm plywood was in the face dimension I decided to make the frame sides 50mm wide leaving, after 6mm tool path widths, enough space for a 358mm wide seat .

Once the dimensions were decided the design went pretty quickly producing something that looked similar to the designs I had seen earlier. 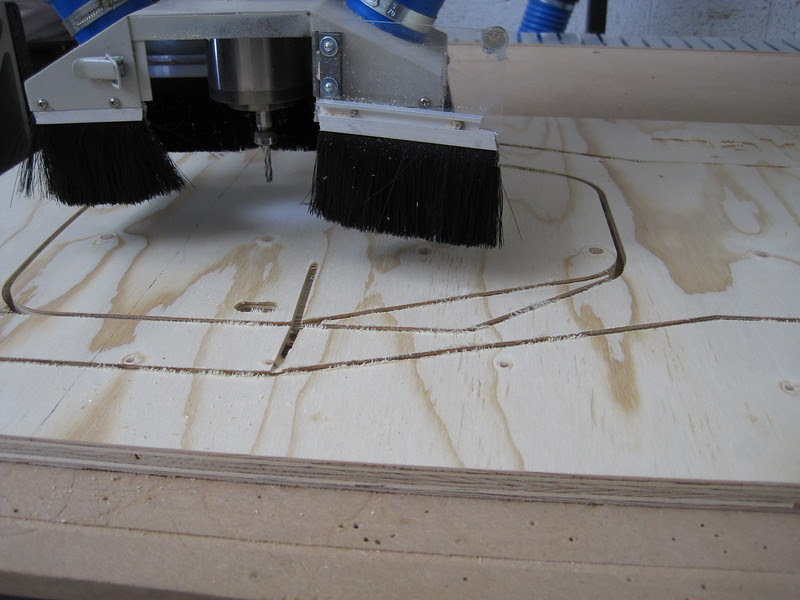 Generating toolpaths for this design proved challenging with the CAM software we had available, mainly because arranging multiple "inner" and "outer" cuts along the same path and having the tabs line up was obviously not an anticipated feature.

Things had been going far too well for me and during the routing operation our machine decided to follow an uncommanded toolpath excursion mid job (it cut a dirty great hole through the middle of my workpiece where I did not want it) ruining the sheet of material.

Fortunately, once factory reset and reconfigured, the machine ran the job correctly the second time although we still do not know why it went wrong. The parts were cut free of their tabs and hinges fitted.

The resulting design worked with a couple of problems: 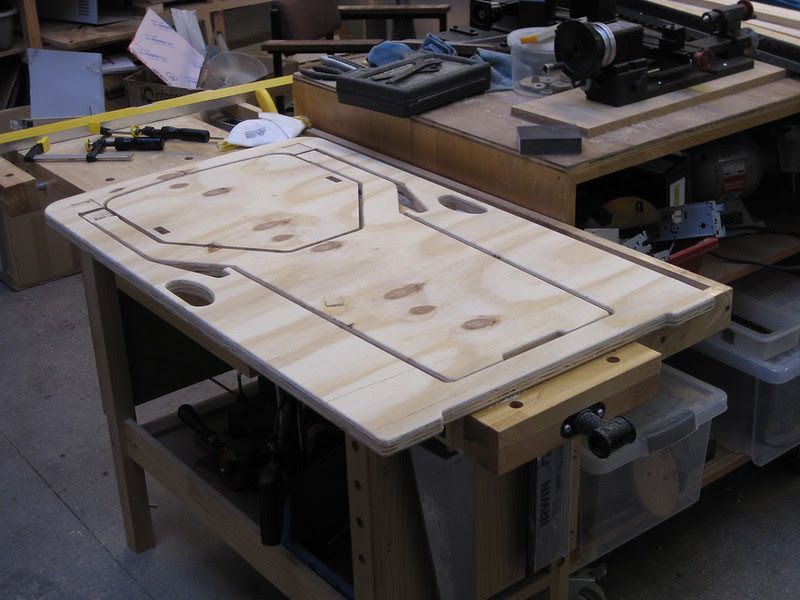 So time for a second iteration, this time I selected a thicker plywood to reduce the bend under large loads (OK already, I mean me). After shopping around for several days I discovered that unlike 12mm and 18mm thick plywood 24mm thick is much harder to find at a sensible price especially if you want it cut into 1220x606 sheets from the full 1220x2440.

I eventually physically went to Ridgeons and looked at what they actually had in the warehouse and got a price on a sheet of brazilian elliotis pine structural plywood for £43.96 which they cut for me while I waited. Being physically present also gave me the opportunity to pick a "less bad" sheet from the stack much to the annoyance of the Ridgeons employee for not just taking the top one. 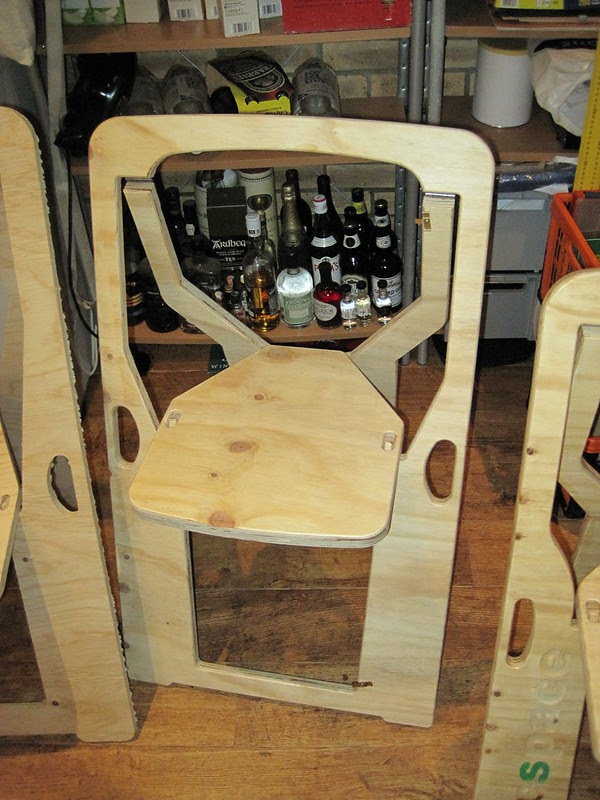 This time I reduced the apex height by 30mm, the length of part 1 by 80mm. I also reduced the frame width by 10mm relying on the increased thickness of the plywood to maintain the strength. In area terms it is actually an increase in material (50mm*17.7mm = 885 against 40mm*22.80 = 912). I also included rebates for the top hinges within the design allowing them to be mounted flush within the sheet width.

The new design was cut (without incident this time) and the edges rounded off. I also added some simple catches to keep the seat and back inline while being transported.

While this version worked I had made a couple of mistakes again. The first was simply a radius versus diameter error on the handles which meant too much material was removed from a high stress area causing increased bending. 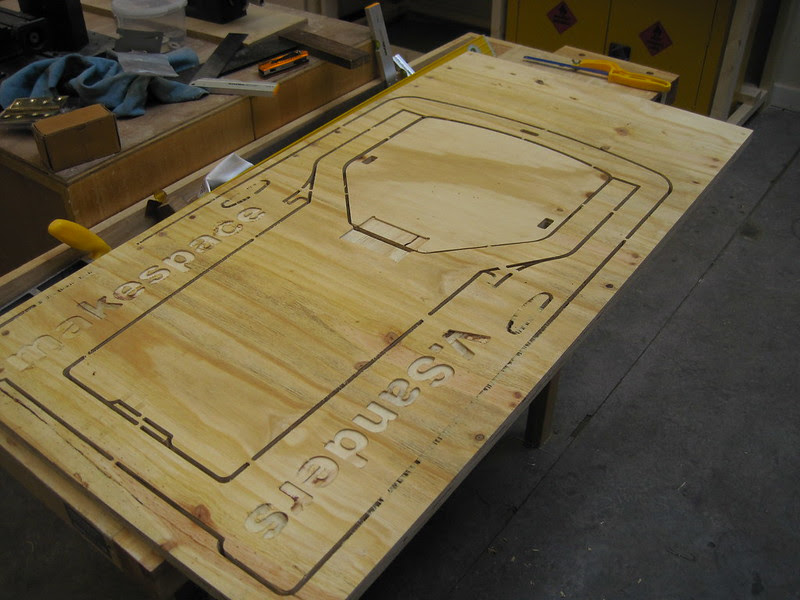 The second error was a stupid mistake that where I had worked the latch holes in the seat to the wrong side of my measure line meaning the apex angle was 35.5° not the expected 33.6 which meant the backrest felt "too far forward"

The third version rectified those two errors and improved the seat front curve a little to further reduce the unneeded material in the back rest.

The fabrication of this design was double sided allowing for the seat hinge to be fully rebated and become flush and also adding some text similar to the stools. 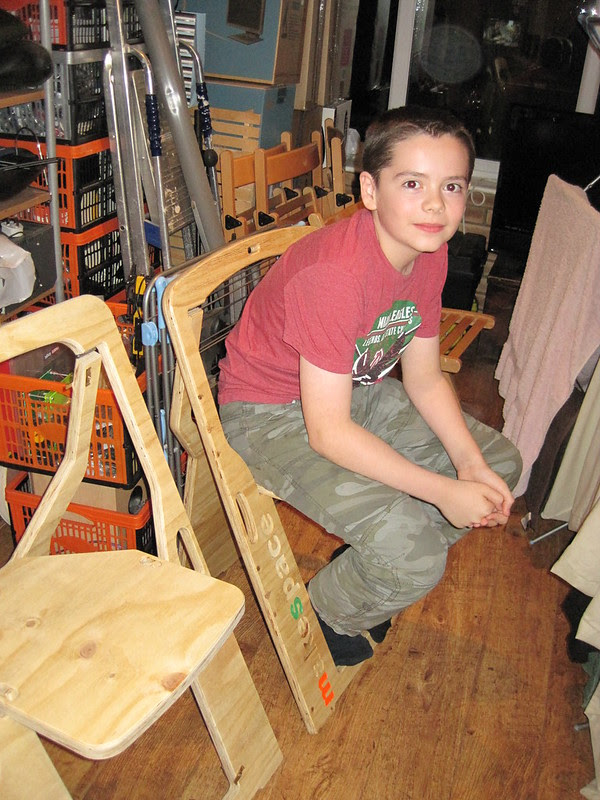 This version still suffers from a backrest that is a bit too far forward and my sons complain it makes them sit up too straight. The problem is that the angle of the front face (23.6°) means that to move the rest back 20mm means the piece needs to extend another 50mm beyond the frame apex which would probably make the chair feel tall again.

I guess this is a compromise that would take another iteration or two to solve, alas my wife has declared a moratorium on more chairs unless I find somewhere to put the failed prototypes other than her conservatory.

One other addition would be a better form of catch for transport. The ones in version 2 work but are ugly, magnets inset into the frame have been suggested but not actually implemented yet. 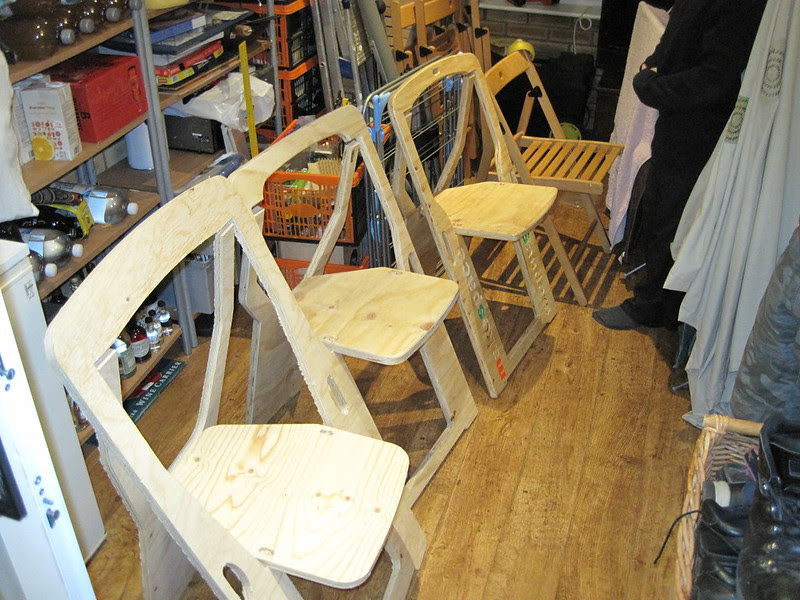 In conclusion I think I succeeded with the original brief and am pretty pleased with the result. A neatly folding chair that can be stacked simply by having a pile of them and are easy to move and setup.

The price per chair is a little higher than I would like at £22 (£11 for timber, £5 for hinges and screws , £5 for varnish and £1 for tool wear) plus about 2 hours labour (two sided routing plus roundover takes ages)

As previously the design files are available on github and there are plenty more images in the flikr set.
Posted by Vincent Sanders at 19:39