I am not a number I am a free man

Once more the NetSurf developers tried to escape from a mysterious village by writing web browser code. 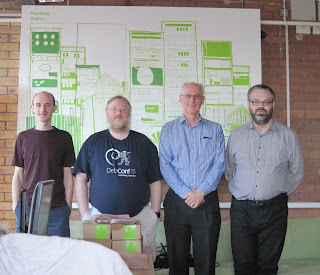 The sixth developer workshop was an opportunity for us to gather together in person to contribute to NetSurf.

We were hosted by Codethink in their Manchester offices which provided a comfortable and pleasant space to work in.

Four developers managed to attend in person from around the UK: Michael Drake, Daniel Silverstone, Dave Higton and Vincent Sanders.

The main focus of the weekends activities was to work on improving our JavaScript implementation. At the previous workshop we had laid the groundwork for a shift to the Duktape JavaScript engine and since then put several hundred hours of time into completing this transition.

During this weekend Daniel built upon this previous work and managed to get DOM events working. This was a major missing piece of implementation which will mean NetSurf will be capable of interpreting JavaScript based web content in a more complete fashion. This work revealed several issues with our DOM library which were also resolved.

We were also able to merge several improvements provided by the Duktape upstream maintainer Sami Vaarala which addressed performance problems with regular expressions which were causing reports of "hangs" on slow processors.

The responsiveness of Sami and the Ducktape project has been a pleasant surprise making our switch to the library look like an increasingly worthwhile effort.

Overall some good solid progress was made on JavaScript support. Around half of the DOM interfaces in the specifications have now been implemented leaving around fifteen hundred methods and properties remaining. There is an aim to have this under the thousand mark before the new year which should result in a generally useful implementation of the basic interfaces.

Once the DOM interfaces have been addressed our focus will move onto the dynamic layout engine necessary to allow rendering of the changing content.

The 3.4 release is proposed to occur sometime early in the new year and depends on getting the JavaScript work to a suitable stable state.

Dave joined us for the first time, he was principally concerned with dealing with bugs and the bug tracker. It was agreeable to have a new face at the meeting and some enthusiasm for the RISC OS port which has been lacking an active maintainer for some time.

The turnout for this workshop was the same as the previous one and the issues raised then are still true. We still have a very small active core team who can commit only limited time which is making progress very slow and are lacking significant maintenance for several frontends.

Overall we managed to pack 16 hours of work into the weekend and addressed several significant problems.
Posted by Vincent Sanders at 13:58