Creativity is allowing yourself to make mistakes. Art is knowing which ones to keep.

It seems Scott Adams insights sometimes reach beyond his disturbingly accurate satire. I have written before about my iterative approach to designing the things I make. such as my attempts at furniture and more recently enclosures for various projects. 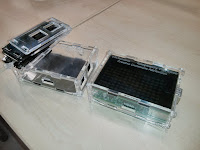 In the workshop today I had a selection of freshly laser cut.completed cases for several single board computers out on the desk. I was asked by a new member of the space how I was able to produce these with no failures?

I was slightly taken aback at the question and had to explain that the designs I was happily running off on the laser cutter are all the result of mistakes, lots of them. The person I was talking to was surprised when I revealed that I was not simply generating fully formed working designs first time.

We chatted for a while and it became apparent that they had been holding themselves back from actually making something because they were afraid the result would be wrong. I went to my box and retrieved the failures from my most recent case design for a Raspberry Pi model B to put alongside the successful end product to try and encourage them.

I explained that my process was fairly iterative, sure I attempted to get it right first time by reusing existing working solutions as a basis but that when the cost of iterating is relatively small it is sometimes worthwhile to just accept the failures.

For example in this latest enclosure:

Generally I do not need this many iterations and get it right second time, however experience caused me to use offcuts and scrap material for the initial versions expecting to have issues. The point is that I was willing to make the iterations and not see them as failures.

The person I was talking to could not get past the possibility of having a pile of scrap material, it was wasteful in their view and my expectation to fail was unfathomable. They left with somewhat of a bad view of me and my approach.

I pondered this turn of events for a time and they did have a point in that I have a collection of thirty or so failures from all my various designs most of which is unusable. I then realised I have produced over fifty copies of those designs not just for myself but for other people and published them for anyone else to replicate, so on balance I think I am doing ok on wastage.

The stronger argument  for me personally is that I have made something. I love making things, be that software, electronics or physical designs. It may not always be the best solution but I usually end up with something that works.

That makespace member may not like my approach but in the final reckoning, I have made something, their idea is still just an idea. So Scott I may not be an artist but I am at least creative and that is halfway there.
Posted by Vincent Sanders at 00:20 1 comment:

Ampere was the Newton of Electricity.

I think Maxwell was probably right, certainly the unit of current Ampere gives his name to has been a concern of mine recently.

Regular readers may have possibly noticed my unhealthy obsession with single board computers. I have recently rehomed all the systems into my rack which threw up a small issue of powering them all. I had been using an ad-hoc selection of USB wall warts and adapters but this ended up needing nine mains sockets and short of purchasing a very expensive PDU for the rack would have needed a lot of space.

Additionally having nine separate convertors from mains AC to low voltage DC was consuming over 60Watts for 20W of load! The majority of these supplies were simply delivering 5V either via micro USB or DC barrel jack.

Initially I considered using a ten port powered USB hub but this seemed expensive as I was not going to use the data connections, it also had a limit of 5W per port and some of my systems could potentially use more power than that so I decided to build my own supply.

A quick look on ebay revealed that a 150W (30A at 5V) switching supply could be had from a UK vendor for £9.99 which seemed about right. An enclosure, fused and switched IEC inlet, ammeter/voltmeter with shunt and suitable cables were acquired for another £15

A little careful drilling and cutting of the enclosure made openings for the inlets, cables and display. These were then wired together with crimped and insulated spade and ring connectors. I wanted this build to be safe and reliable so care was taken to get the neatest layout I could manage with good separation between the low and high voltage cabling.

The result is a neat supply with twelve outputs which i can easily extend to eighteen if needed. I was pleasantly surprised to discover that even with twelve SBC connected generating 20W load the power drawn by the supply was 25W or about 80% efficiency instead of the 33% previously achieved.

The inbuilt meter allows me to easily see the load on the supply which so far has not risen above 5A even at peak draw, despite the cubitruck and BananaPi having spinning rust hard drives attached, so there is plenty of room for my SBC addiction to grow (I already pledged for a Pine64).

Overall I am pleased with how this turned out and while there are no detailed design files for this project it should be easy to follow if you want to repeat it. One note of caution though, this project has mains wiring and while I am confident in my own capabilities dealing with potentially lethal voltages I cannot be responsible for anyone else so caveat emptor!
Posted by Vincent Sanders at 00:08 3 comments: