I have used the Gource tool for a few years now to produce visualisations of project history. The results are pretty but not especially informative and mainly serve to show how well maintained a projects revision control history is. 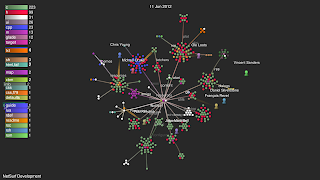 The results do however provide something pretty to put on projectors and screens at shows when there is nothing better to be displayed.

Recently I noticed the Gource tool got updated and I decided to compile it and give it a try. After the usual building of the dependencies (including all of libboost!) the new version (0.38) gives much better results than the previous edition I had been using (0.27).

I tested it on the NetSurf git repository generating an overview for the whole ten years the project has been running which produced a six minute video which I shall be using on the NetSurf stand at our next show.

Overall if you need a historical visualisation of your projects revision history Gource is a pretty good tool. I have also used the alternative "code swarm" tool in the past but that seems to have bitrotted to death so I cannot recommend it.
Posted by Vincent Sanders at 23:36 6 comments:

I don't drink coffee I take tea my dear, I like my toast done on one side...

Choices, options, selections if you rather. These are what set us all apart from our fellow man, perhaps it is only the appearance of free will and individuality but our world is full of choice.

In software it might be argued programming is nothing more than making thousands perhaps millions of choices which result in a list of instructions for a machine incapable of making decisions of its own.

On a more mundane level sometimes a programmer cannot make a choice suitable for all expected use cases and a user option is created. These options have become something of a cause for arguments within certain sections of the open source software community especially amongst the groups that influence the graphical user experience.

The discussion should be nuanced and varied (perhaps that is my age, or maybe I am more diplomatic than I thought?) but there seems to be little compromise on this discussion which (from an outsiders point of view) splits into two viewpoints:


The reductionist group is currently winning the argument in the popular graphical environments and seem to be removing functionality which requires user choice wherever they can find it. This results in the absurd "joke" that the UI will become a single button, which they are trying to remove.

Personally my view is that an option should be present only when an option cannot be satisfactorily selected by the computer and even then a default suitable for as many users as possible should be picked.

You may ask why I have raised this topic at all? well over the last few days I have been trying to fix the preferences selection for the GTK port of NetSurf. The NetSurf project follows my view on this subject pretty closely but being a browser its very difficult to do the right thing for everyone

NetSurf has numerous frontends for the core browser, I use the term frontend because in some places the toolkit and OS are conflated (windows, cocoa) and not in others (gtk). For each frontend NetSurf is a native application, this is an important distinction, the windows and widgets a user interfaces with are produced by that platforms toolkit.

This is a deliberate choice unlike other browsers which render their UI themselves as web content, this is a beguiling solution when the authors wish there to be a single browsing "experience" with a common look and feel. However NetSurf looks and feels like a native browser for each frontend, which is what the project decided it wanted to achieve.

Given this the gtk frontend (is it a Gnome application? not sure of the distinction TBH) has had no dedicated maintainer for some time it has suffered from a bad case of bitrot from both GTK library changes and general neglect.

I have slowly been improving this situation, the browser can now be compiled with GTK version 2 (2.12 onwards) or 3, the menus and other UI elements have been translated for the supported languages and now the turn has come for the options dialog.

Oh, right, its "Preferences" not options, fair enough a common semantic throughout all applications does give a degree of homogeneousness but the word choice does seem to indicate the users control has been reduced. At this point I gained an education in just how unfriendly GTK and its tools have become towards the casual programmer.

The dialog I wanted to construct was a pretty standard tabbed layout which reflected the current options and allowed the user to change them in an obvious way. Given that I have constructed and equivalent interface in idiomatic manner for cocoa and windows I thought  this would be straightforward, I was very wrong.

The interface construction tool is called glade which used to be the name of the UI "resource" file and interfaces. However the tool is still called glade but the interface is now GtkBuilder which has a different (but similar) XML based file format. Then we discover that despite it being an extensible file format the UI files are specifically versioned against the GTK library. Also why on earth can these resources not be compiled into my program? OK make them over-ridable perhaps. Generally it is yet another file to distribute and update in step with the executable.

So because I want to support back to version 2.12 of GTK I do not get to use any of the features from 2.16 in my UI unless I load a different UI builder file...oh and GTK3? requires a completely different version of glade and the UI files which are incompatible with gtk 2. Once this was worked round with having multiple UI files I then moved on to the next issue.

The GTK model uses function callbacks on events, these are known as signals. Perfectly reasonable but because the ui files are loaded at runtime and not compiled in there must be a way for the GTKBuilder to map the textural signal names to function pointers.

The way the GTK developers have chosen to do this is to search the global function table which means any signal handler function symbol has also to be global which means unnecessary overhead for the ELF loader increasing load times.

This lookup should have been confined to a single object or even placed in an alternative section to avoid these issues, this would not have seemed especially challenging to implement as all callback handlers have to use a preprocessor to define already (G_MODULE_EXPORT).

Another thing that makes developing GTK applications worse is the documentation, this seems to be a continuous complaint about may open source projects, which is taciturn or simply missing in many cases. GTK seems to suffer dreadfully from having multiple API versions all subtly different resulting in a lot of work on the developers part to simply find what they want.

A specific example of this is the signals and under what circumstance they occur  I wanted to update all the widgets with the current configuration state whenever the options window is shown (using gtk_widget_show()) so I figured that would be the "show" signal...right? nope, never did find the right one to use, ended up with "realize" which occurs once when the dialog is created, not what I wanted, but is at least consistent and works.

Overall my impression of developing just one small dialog (60 widgets total exclusing labels and containers) for a GTK program is that the toolkit and its tooling is missing the facilities to make developers life easier when doing the drudge work that a good proportion of graphical program development.

It is not the case that one cannot do things, just that everything has to be done manually instead of having the tools do the work, and because of the documentation that tedium is magnified.

I did eventually reach the stage that the thought of writing the boilerplate to add another check button to enable "do not track" had me thinking "do they really need this or can I avoid the work?" perhaps that is why they are all reductionist?