The minority yields to the majority!

Deng Xiaoping (who succeeded Mao) expounded this view and obviously did not depend on a minority to succeed. In open source software projects we often find ourselves implementing features of interest to a minority of users to keep our software relevant to a larger audience.

As previously mentioned I contribute to the NetSurf project and the browser natively supports numerous toolkits for numerous platforms. This produces many challenges in development to obtain the benefits of a more diverse user base. As part of the recent NetSurf developer weekend we took the opportunity to review all the frontends to make a decision on their future sustainability.

Each of the nine frontend toolkits were reviewed in turn and the results of that discussion published. This task was greatly eased because we we able to hold the discussion face to face, over time I have come to the conclusion some tasks in open source projects greatly benefit from this form of interaction. 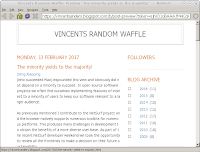 Coding and day to day discussions around it can be easily accommodated va IRC and email. Decisions affecting a large area of code are much easier with the subtleties of direct interpersonal communication. An example of this is our decision to abandon the cocoa frontend (toolkit used on Mac OS X) against that to keep the windows frontend.

The cocoa frontend was implemented by Sven Weidauer in 2011, unfortunately Sven did not continue contributing to this frontend afterwards and it has become the responsibility of the core team to maintain. Because NetSuf has a comprehensive CI system that compiles the master branch on every commit any changes that negatively affected the cocoa frontend were immediately obvious.

Thus issues with the compilation were fixed promptly but because these fixes were only ever compile tested and at some point the Mac OS X build environments changed resulting in an application that crashes when used. Despite repeatedly asking for assistance to fix the cocoa frontend over the last eighteen months no one had come forward.

And when the topic was discussed amongst the developers it quickly became apparent that no one had any objections to removing the cocoa support. In contrast the windows frontend, which despite having many similar issues to cocoa, we decided to keep. These were almost immediate consensus on the decision, despite each individual prior to the discussion not advocating any position.

This was a single example but it highlights the benefits of a disparate development team having a physical meeting from time to time. However this was not the main point I wanted to discuss, this incident highlights that supporting a feature only useful to a minority of users can have a disproportionate cost.

The cost of a feature for an open source project is usually a collection of several factors:

Developer time
Arguably the greatest resource of a project is the time its developers can devote to it. Unless it is a very large, well supported project like the Kernel or libreoffice almost all developer time is voluntary.
Developer focus
Any given developer is likely to work on an area of code that interests them in preference to one that does not. This means if a developer must do work which does not interest them they may loose focus and not work on the project at all.
Developer skillset
A given developer may not have the skillset necessary to work on a feature, this is especially acute when considering minority platforms which often have very, very few skilled developers available.
Developer access
It should be obvious that software that only requires commodity hardware and software to develop is much cheaper than that which requires special hardware and software. To use our earlier example the cocoa frontend required an apple computer running MAC OS X to compile and test, this resource was very limited and the project only had access to two such systems via remote desktop. These systems also had to serve as CI builders and required physical system administration as they could not be virtualized.
Support
Once a project releases useful software it generally gains users outside of the developers. Supporting users consumes developer time and generally causes them to focus on things other than code that interests them.

While most developers have enough pride in what they produce to fix bugs, users must always remember that the main freedom they get from OSS is they recived the code and can change it themselves, there is no requirement for a developer to do anything for them.
Resources
A project requires a website, code repository, wiki, CI systems etc. which must all be paid for. Netsurf for example is fortunate to have Pepperfish look after our website hosting at favorable rates, Mythic beasts provide exceptionally good rates for the CI system virtual machine along with hardware donations (our apple macs were donated by them) and Collabora for providing physical hosting for our virtual machine server.

Despite these incredibly good deals the project still spends around 200gbp (250usd) a year on overheads, these services obviously benefit the whole project including minority platforms but are generally donated by users of the more popular platforms.

The benefits of a feature are similarly varied:

Developer learning
A developer may implement a feature to allow them to learn a new technology or skill
Project diversity
A feature may mean the project gets built in a new environment which reveals issues or opportunities in unconnected code. For example the Debian OS is built on a variety of hardware platforms and sometimes reveals issues in software by compiling it on big endian systems. These issues are often underlying bugs that are causing errors which are simply not observed on a little endian platform.
More users
Gaining users of the software is often a benefit and although most OSS developers are contributing for personal reasons having their work appreciated by others is often a factor. This might be seen as the other side of the support cost.


In the end the maintainers of a project often have to consider all of these factors and more to arrive at a decision about a feature, especially those only useful to a minority of users. Such decisions are rarely taken lightly as they often remove another developers work and the question is often what would I think about my contributions being discarded?

As a postscript, if anyone is willing to pay the costs to maintain the NetSurf cocoa frontend I have not removed the code just yet.
Posted by Vincent Sanders at 23:01 6 comments: