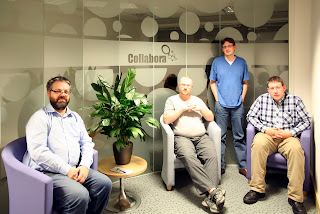 The weekend saw some of the NetSurf developers gather once again to do battle against the Red Queen...no, wait. I mean plan and write code.

The successful event was once again kindly hosted by Collabora at their Cambridge office, the facilities remain as good as at the previous event and provided a comfortable environment in which to work.

Four developers managed to attend from around the UK John-Mark Bell, Vincent Sanders,  Daniel Silverstone and Rob Kendrick. The turnout was a little lower than previous events, however Michael Drake managed to assist with some bug fixes remotely.

From Friday to Sunday afternoon we each managed to put in 24 hours of work consisting of almost 90 commits changing over 100 files and removing 10,000 lines of code.

The main theme of the event was consolidation ready for the 3.0 release. While not a glamorous target this is a major release for the project which we want to achieve soon, this requires the completion of numerous ongoing tasks (like finally removing the dependency of libxml) and fixing as many reported bugs as possible.

The Major things we achieved were:


Once the final usage of libXML is removed (from the hotlist code) NetSurf will become substantially smaller on several platforms as we will not have two separate parser implementations linked.

One big feature of the 3.0 release which was not originally on the roadmap is that of JavaScript. We initially intend to provide two builds of with and without the JavaScript interpreter compiled into NetSurf. This allows those on very small systems to continue to run NetSurf and those users who want a richer web experience to enjoy it.

Although JavaScript is a major new feature which is frequently requested the initial implementation will be incomplete. To complete the feature several thousand JavaScript to DOM interface binding functions must still be written. In addition it should be noted that we have yet to add dynamic layout or extensions such as Canvas or WebGL 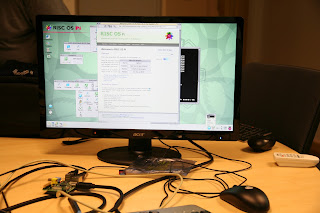 We had a Raspberry Pi which was used to run RISC OS so we could examine the operation on this system.

The 2.9 edition as shipped works OK but is lacking the substantial progress made in the last six months.

The CI system build was run on the system and works well so we are reassured the 3.0 edition will provide an even better browsing experience.

The event was a great success overall and we are now very close to our 3.0 release which we hope to produce before Christmas.
Posted by Vincent Sanders at 13:22